An Inconvenient Truth is an important movie about environmental concerns, one which I believe everyone should watch, as either an introduction to or reminder of major issues we all face. Al Gore takes us through the presentation about Global Warning that he makes over and over again across the world, and the documentary part of the movie takes us with him, giving us insights into his own journey to this place where he can speak “inconvenient truth.”

I have been struck by several recent blog entries, videos, news items, events and comments from friends that also speak to inconvenient truths. How do you know something is an inconvenient truth? Mostly by the silence that accompanies the telling.

Breaking the silence surrounding inconvenient truths is the full and part time work of people who in their own ways are heroic. Al Gore is one such hero. In Anglican Circles so are a wide variety of people, some positive heroes, some villains, some just folks who tell inconvenient truths as they can.

As it is an inconvenient time for the Anglican Communion, here are some possible inconvienent truths in the mess in to which we have gotten ourselves:

Inconvenient truth (IT) #1: There are bishop marauders out there and no one is deputized to stop them. No one has caught the pirate Bishop Lyons, except Fr.Jake. The IT here is that Bishop Lyons is clearly in the wrong and no one seems to be able to do anything about it. Fr. Jake has posted an important question – “What do we do with such pirates? Keel hauling comes to mind, but I suppose that is not too Christian of an idea. seems too preoccupied with holding the center to be concerned about renegade bishops prowling the perimeter. Our own leaders seem helpless to prevent such raids. Me heartys, 't may be up t' us t' avast this scallywag.”

Other notables include bishops in , , and . Wanted signs would be in order, if we believed in the .

IT #2: It’s the Archbishop’s Party. We don’t yet know who is going to be invited to Lambeth (bishops no doubt). But, after a variety of hints to the contrary, a testy message from Lambeth Palace set us straight: According to the Living Church, “Canon James Rosenthal, communications director of the ACC, said, ‘Canon Kearon did not mention who was coming or not coming to the Lambeth Conference during his time in New York at the bishops’ meeting. The matter of invitations to the Lambeth Conference is solely in the hands of the Archbishop of Canterbury and has nothing to do with Canon Kearon.’” This is helpful, if inconvenient for some.

It has been suggested in the past that the Archbishop cannot decide on his own who may or may not come to Lambeth. Well, that’s over. He does not have to ask the Primates, the Anglican Consultative Council, the Archbishop of York, or anyone. It’s up to him.

IT #3: Consulting with those who are “the problem” is not the Anglican way. The group advising the Archbishop of Canterbury on how to respond to the Episcopal Church, its actions at General Convention and its relation to the Anglican Communion does not include anyone from the Episcopal Church. This continues the IT that it seems inconvenient to consult those referenced. So, never consult gay persons, progressives or other seemingly outrageous persons on matters that concern them. At least there are two lay persons.

I realize and even agree that the Archbishop can consult with whoever he wants. My concern is that he seldom seems to want to consult with people who are “the problem."

George Conger reported in the on September 15, 2006, “A new advisory group consisting of Archbishops Bernard Malango and Barry Morgan along with two lay leaders, lay Canon Elizabeth Paver of the Church of England and Mrs. Phillipa Amable of will meet in November.” This “new advisory group” is clearly the one promised to advise the Archbishop in his efforts to determine just what to do with us. The two Archbishops have been previously mentioned as part of this group, but until now there was no confirmation of this and no indication of the other members of the group.

IT #4: There will be no more meetings of Network Bishops and the leadership of the Episcopal Church. The meeting in is the last such meeting concerning a solution to the question of alternative primatial oversight. At least Bishops Duncan and Iker have said its over; Bishop Iker in a letter and Bishop Duncan on video. This seems to be “just the facts” as far as they are concerned. It is an IT for almost everyone else.

IT #5: The Church of Nigeria does not believe in, follow, or have any interest in the Windsor Report’s recommendations. This is only an IT for those Anglican Communion instruments of communion, foci of unity, etc, who have to finally deal with the and its place in the Anglican Communion.

Well this IT is one that cuts all ways.

Thinking Anglicans (always on target) had this comment to make regarding the election in : “The consecration of Mark Lawrence is scheduled for February 24, 2007. First, the consents of a majority of both bishops with jurisdiction and diocesan standing committees must be obtained: some resistance is likely. It is unclear who will preside at this service.” While it certainly is true that the question of consents is being talked about a good bit, assuming they do come in, it is absolutely clear who will preside: the Presiding Bishop or whoever she appoints.

There are many inconvenient truths, even in the Church, but I would be remiss not to add the final one on this list, from the Mad Priest, a wonderfully creative strange fool for Christ. 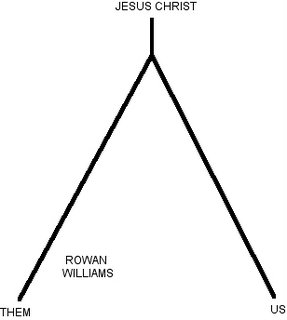 IT #8: The Anglican Communion simplified: Diagram used with permission. Glad Jesus Christ is the head, wish there were not "them" and "us."