The Questions get Sharper (revised x2) 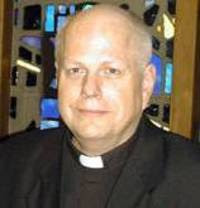 Bishop Paul Marshall wrote a letter that first appeared on the House of Bishops/ House of Deputies list. It has since been widely posted on the internet. As far as I can find it first appeared in the blogsphere outside the list on the blog Of Course I Could Be Wrong. We can presume it refers to the upcoming meeting of the House of Bishops March 16-21. Thanks to Louie Crew, whose Anglican Communion pages continue to be a treasure of information.

The letter itself raises questions that have been raised on this and several other blogs. The primary question is whether the Archbishop of Canterbury has anything to say about his distancing of himself and his office from the Episcopal Church and its House of Bishops. That distancing certainly holds the potential that the shunning that is currently going on would lead to a meltdown in the relationship between the Church of England and The Episcopal Church.

Read the whole of his letter HERE and HERE, and HERE.

Bishop Marshall makes it clear, “… we deserve to hear from him (the Archbishop), in the room with us, an explanation of his distance and intentions. We are all busy, and we show up where we believe it is important to go. Let's hope we become important.”

Bishop Marshall also comments, “The widely-publicized photograph of Rowan, Frank, and Katharine all standing as far away from each other as the camera lens would allow has not been without its effect on many among us. A dismal icon of formal communion without a hint of affection or connection has been sent to the entire inhabited world.” 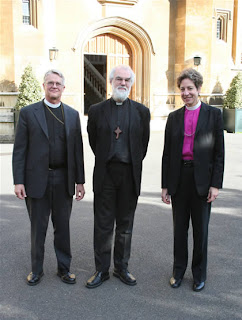 Here is that photograph. I think the Bishop is right. (revised: Several responses have made me realize that there is no little to tell us in the photography why they are standing apart. In some other photos he is standing nearer those with him, but who knows what that means. What is important perhaps is that Bishop Marshall believes the Archbishop to be cool towards the American PB and PB elect, and that is an example of the wider distance felt between the ABC and the House of Bishops.)

The issues of the Covenant Process is addressed by Bishop Marshall: “All of this said, it seems necessary to report my perception that the nadir in Rowan's overall relationship to the US, Canada and perhaps South Africa has been the appointment of a virtual lynch mob to draft the Covenant that will by all reports attempt turn a fellowship into a curial bureaucracy in which the worst elements of the great and oppressive Colonizer and of the Resentful Colonized will as meet as a scissors to the denigration of significant number of God's people who were almost equal in Christ for one brief shining moment.”

Well, it’s good to see a bishop in a lather about the Covenant Design Group. The drift of the covenant business seems indeed to be towards a “curial bureaucracy.”

The obvious question of how this all will play in the established church was asked by Nigel Taber-Hamilton of Whidbey Island, Washington, of Roger Stokes in England. He reported Roger’s reply on the House of Bishops / House of Deputies list and I have his permission to publish the exchange.

Nigel: “ Roger, Do you know if the C of E could accept an Anglican Covenant without Parliament's approval? Seems to me that such a change as radical as this would require it.”

Roger: “It depends on what form the Covenant takes when it eventually emerges from the Drafting Group. Any move on doctrine as founded in the Holy Scriptures would require Parliamentary approval, but how do you define "founded in"? Theologians are not agreed on how to apply the various passages in today's world and psycho-sexual understanding. The House of Bishops paper "Issues in Human Sexuality", which set norms and invited further discussion, did not require Parliament's nod. Signing up to a Covenant which gave another body the power to change the Church's doctrine and discipline probably would.

However it would first have to be passed by General Synod and I am not prepared to assume that it would get over that hurdle. Unless the Covenant
is fairly anodyne I would expect it to have a difficult passage in Synod. When "Issues" was last debated there we saw remarkable unity from the House of Bishops in ensuring the defeat of any amendment to the motion calling for study and debate. (This regimented opposition turned out not to have been necessary as every amendment stressing one side or the other was defeated in the other Houses as well.) I cannot see any proposal to sign up to a Confession or Covenant as some Provinces seem to want receiving any easier passage over ten years later.

That could then leave us in the interesting position of the Focus of Unity, and President of the Instruments of Communion, heading a Province that is in the "associate" group of Churches. If that happened I think we would be in a very different type of Communion from the one we had up until five years ago. Judging by his comments on homosexuality (and his reference to males may be because sexual activity between two females has never been illegal in the ) the new Primate of Ireland will be another supporter of inclusivity when the Primates gather in .

My assessment is that it will be difficult for the Global South group to impose their views on the Communion as a whole and it is a matter of judgment for them how hard they will push. If they push as hard as some would like then it will lead to fracture of the Communion, partly because some of their bishops have admitted they have not studied the issues so their opposition will not be accepted by those who have engaged in that study. They are, of course, free to maintain their own groups for mutual support but I do not see any move to expel TEC or the Canadians from the Communion getting through the Anglican Consultative Council, and any attempt by the Primates to force the issue would cause further resentment and opposition there.

In my view a wiser course by the Global South Provinces would be not to push so hard but to say that certain individuals, or those belonging to certain groups, may not minister in their Provinces because the views they express might weaken the faith of others. By so doing they could argue they were following in the advice of about refraining from actions that would undermine the faith of others. The Primates' Meeting will be interesting and, as Archbishop Rowan has said, there will be the need for discernment and decisions. Will people like Archbishop Akinola stay at the table to share in that process or not? That is his decision. Will the Primates accept the principle of organizations like ? I doubt it, and certainly not unanimously. My sense is that all the rope has been played out and is about to be jerked. We will see next month and meanwhile all we can do is pray.”

“All the rope has been played out and is about to be jerked.” There it is. The Covenant Design Group is meeting this month in preparation for the meeting of the Primates in . One wonders if they will hear what Roger Stokes has said or what Bishop Marshall has thundered.

The ingredients for the stew are ready to be thrown together. What will it taste like? “We will see next month and meanwhile all we can do is pray.”