"The Global South Anglican Steering Committee has commissioned its Theological Formation and Education Task Force to draft a theological framework of an Anglican Catechism for the worldwide Communion.

The Proposal will be submitted to the Steering Committee for release by June 2008."

Audacious reach, yes? The GSASC, whose chair by the way is the always present Archbishop Akinola, has commissioned something a (an Anglican Catechism) for the worldwide Communion. What this means is that such a Catechism, is commissioned for that entity that the GSASC will consider constitutes "the worldwide communion." 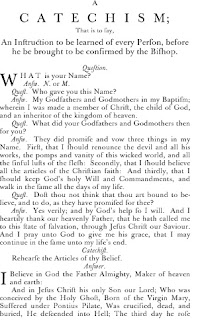 Recall that the Global South folk are prepared to raise up an alternative to the Anglican Communion as currently constituted.

So, just what, do you suppose will be in this "draft theological framework" and the resultant Anglican Catechism? How different will it be from the beloved 1662 prayer book?

Why the release date of June 2008? Well, just in time for the founding meeting of the OTHER Anglican Communion's bishops conference, you know, the conference for those bishops not wishing to spend their time or energy with those invited to Lambeth.