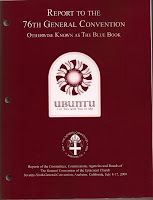 My primary questions of this work had to do with the spirit of the thing - whether or not it was particularly useful or helpful to have expansions of the calendar related to the Book of Common Prayer (BCP) in a book outside the BCP. This seems to run counter to the hope that in the BCP, one book, could be found all that was necessary for worship in the Church. Supplemental materials, such as those offered by other resolutions of the SCLM, seem to me to be sufficient for local variation, use, etc. But changes in the calendar and the additions of saints and remembrances flow over into the "regular" services of the BCP. So now worship seems to require the BCP, Hymnal, perhaps additional Hymnals (Lift Every Voice and Sing / Wonder, Love and Praise), and now HWHM.

It can be argued that HWHM is supplemental in that it is not necessary to commemorate all these folk - they are, after all, lesser feasts and fasts still. And in the regular round of daily prayer there is no need to use the lessons indicated (they are sometimes a strech) particularly if one is reading for serial content.

I was very pleased to see that Dan Martin over on Confessions of a Carioca has written on HWHM. His essay is quite detailed and mostly challenging in the right sort of way. Go read it HERE. After reading it, come back here and let us know what you think.

I have one particular issue with Dan. It concerns what Dan calls a Trojan Horse. He believes the SCLM is sneaking in a change in theology away from the claim that Jesus is Lord by not using "in Jesus Christ our Lord" in closing the collects that are being written. He says,

"The fundamental (and earliest) Christian creed consists simply of two Greek words which take three English words to translate: Jesus is Lord. It's not an option, one alternative among many. It's not a metaphor, one image among many. It is a basic Christian confession. If you can't make that confession, full-throatedly and with uncrossed fingers, you can't be a Christian. So there's nothing particularly wrong on this account with any single given collect of the 112 proposed additional observances. It's the trend that is cause for alarm. It bespeaks a church that talks a good talk about its theological moorings in Catholic Christianity, but is in the process of weighing anchor, throwing the rope back on the dock, and drifting out on the tide of distorted perceptions of oppressive language.
Moreover, the SCLM needs to be called on their subversive tactics. For decades now they've just been sneaking in this Trojan Horse under the guise of other agendas--this time the calendar (as well as pastoral rites for issues surrounding pregnancy and childbirth, which I'm not dealing with in this post). People are naturally curious about the "presented" topic, and the "akyrial" (did I just coin a Greek word?) theology in the proposed prayers doesn't register on their screens. It would be much healthier to have the discussion about liturgical language out in the open, as its own topic, rather than just sneak it in covertly.
Those who have the ability to rake muck, now's the time." Well, I'm not up for raking muck, or mucking about too much. I kind of agree with Dan. The phrase, "Jesus Christ our Lord" is just fine with me. Jesus is Lord. But "Lord" is not a divine word. It is a word that crosses over and is used quite often of regular paid up mortal scoundrels.

That of course is part of its power. To say Jesus is Lord is also to say that Lord Foggybottom of Shropshire is not, or if he is, he is a decidedly lesser lord. Or alternatively Lord Foggybottom is your lord, Lord Snotdriven is my, but OUR Lord is Jesus Christ. There are lots of way to cut to the chase, but the point is there - our allegiance is finally to Our Lord, to Jesus as Lord.

Other words having to do with allegiance come in of course and they serve well in places where there are not now lords and never have been. The Lord language works best where we have such regular paid up human beings with the title. But I do not agree that the particulars of the phrase, "Jesus is Lord," or the prayer version, "in Jesus Christ our Lord" are a requirement of good theology, adequate faith expression, or such. There are other ways to say it, mean it and be faithful to Jesus and follow him.

At the same time I share Dan's suspicion of the politically correct. Moving from Jesus is Lord to something else because we don't have or don't like lords is not enough. My son and his friend at age six were once arguing about God and one of them said, "God is the boss of everything." One might suggest that Jesus is the incarnation of the boss of everything. So, perhaps Jesus is Boss would work. No...wait, perhaps God is the real organizer of everything and thus Jesus is THE Organizer (dare we say the Community Organizer.) The mind boggles.

If there is a Trojan Horse here it will go the way of the phrase "The Commonwealth of God" popular for a while in England wishing to move beyond having a King. If the new phrasing is meant to accent faith matters that are of particular importance to the moment, perhaps it will rise as a new title of value. I am, by the way, not particularly infatuated with "Jesus Christ our Saviour," not because I don't believe Jesus saves, but because I don't think that is as central as the reality that Jesus leads, we follow.