Reporting on the first full day following the earthquake in Port au Prince, Simon Romero, writing for the New York Times ended his report with this amazing image:

"With no electricity, stars offered the only illumination in the city, which, with its suburbs, is home to nearly 3 million people. For some of those lying on the asphalt or in the parks, cellphones provided a brief glimpse of light.

Then the singing began. Those gathered outside tents, on lawn chairs, sitting in the middle of empty streets, sang their hymns. One phrase in Creole could be heard repeatedly both inside and outside the hospital walls, as if those voicing the words were trying to make sense of the madness around them.

“Beni Swa Leternel,” they sang. “Blessed be the Lord.”

May the faith of the people of Haiti carry them through the terrible times to come. 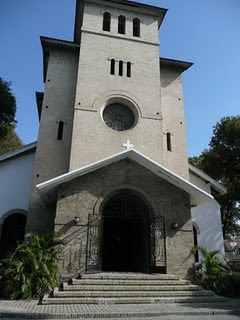 Seeing the picture of Holy Trinity Cathedral yesterday I was reminded of the time many years ago now when I celebrated mass at six in the morning on weekday there. There were about fifty people, birds in the rafters, the wondrous murals on the walls, the sweet smells of a new tropical day, two earnest acolytes and me with my rotten French. It was perfect. The report is that the Cathedral, like the Roman Catholic one, has collapsed. The murals I suppose gone, along with the schools and so much else. And then we wait on news from friends. We have heard from several, who, thank God, are safe. But the wait goes on for news of others.