Clearing out the books...take two... So much for the New Europe.

"The New Europe."  That is a phrase that has made two rounds, one in the early part of the 20th Century, and a second time just in the past twenty or so years. The first round lead to a century of disaster in which Europe's immense talent and ability ate at itself and consumed its best minds and bodies in gas and ash, bureaucratic paranoia and massive propaganda led numbing of the spirit. 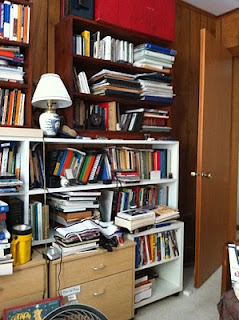 I was reminded of all that today cleaning out old books in an effort to make my study reasonably tidy.

Along about 2002 I stood as a candidate for suffragan bishop in Europe along with two wonderfully talented candidates. Prior to the day of election we had a day of meetings with various of the electing delegates. At one of these someone raised this question: "Fr. Harris, we know that you write essays on the Internet, mostly about The Episcopal Church. If you were elected what might you write about from this vantage point?"  (That is pretty close to verbatim, but its been some time now.)

Well, my response was not comforting. I said, roughly, "I have been reading about the New Europe and I suppose I will have some things to say about that as time goes by." "Well," said the speaker, "what do you think now?" "I find it hard to understand just what the New Europe is going to look like. I don't think there has been enough work done on understanding what the last century was about. I mean, the first half of the last century Europeans killed each other off in remarkable numbers and in the second half of the century seemed studiously to avoid talking about it."

Well, it was, at the very least impolitic to say.  I was influenced in my remarks by having read "Dark Continent: Europe's twentieth century" by Mark Mazower.  I had also a book in hand with the title, "The New Europe..."  Fortunately over the years that one has disappeared. Oh well.

The question of the New Europe is still very much alive:  Will Europe repeat the same-old same-old and devolve once again in to regional disputes, various forms of xenophobia, and outright racists and anti-Semitic behavior or will there be a blooming of some non-fearful, hopeful Europe worthy of the name?  An article in the Guardian, "A manifesto for a new Europe," raises this possibility once again.

We must help further in any way possible the vision of a new Europe as outlined in this Manifesto. The repeat of the last century is a cold and terrible possibility. And to be frank a possibility here in the US as well.  The way forward will not look like the past, and that includes the use of religion as the propaganda link between feeling special to the Lord and the desire to clobber anyone who makes us afraid.  I was right to ask the question then, although it did not help my candidacy.

The core of the Manifesto is the following:

A new inclusive politics in Europe must embrace and build on at least four core principles:

1. Diversity as the essence of Europe

The vision of an authentic and pure, culturally homogenous Europe is nothing but a fiction, yet a powerful and a dangerous one. Let us recall, and let us admit, that for its best achievements Europe has always drawn on the creative energies of the world, on the positive engagement among people of diverse descent and complex biographies, on the respect for gender, racial, sexual, religious, cultural differences and preferences. It is this tradition of openness and inclusion, and not Europe's other, darker, legacy of supposed superiority, closure and suspicion that needs to be revived in facing an uncertain and turbulent future.

2. An ethos of solidarity and hope

If there is uncertainty and turbulence to face, history shows that this is best done through courage and dialogue, not fear and intolerance. The politics of fear that pervades European society must be exposed, rejected and make way for an ethos of facing the future with courage by mobilising the collective energies of diverse publics. Such an ethos would enable us to confront the common concerns of all members of European society independently of their origin – an ethos of hope not fear, trust not suspicion, reciprocity not domination, dialogue not condemnation, negotiation not aggression.

A shared sense of purpose centred on a reinvigorated notion of "the commons" is needed – a notion of generating and safeguarding our shared cultural, economic and social environment, alongside protecting the natural environment against pollution and consumption. Key elements of such politics of the commons are the maintenance of an active public sphere, decent public services and vibrant public spaces, environmental respect and protection, insurance against hazard and risk, utilities and technologies that enable rather than disable. Above all, a culture of respect for the commons should become a means of reconciling difference.

Issues of cultural policy are inseparable from issues of economic policy. Economic solidarity is indispensable both for fostering tolerance and for achieving inclusion. We therefore need policies that build on the European heritage of social fairness: a social economy that spreads opportunities and rewards; universal social insurance; corporate social responsibility; work for all and fair wages, along with continuous building of human capabilities. In line with this tradition, which goes beyond particular ideological belongings and partisanship, a regulatory reform is now urgently needed to ensure the submission of the needs of the markets to those of societies. It is through such policies that future growth can be directed to the many and not only the few, and thus generate social attitudes and practices that oppose envy and enmity.

Let us oppose, together, the culture of emergency management based on obsessive surveillance, control and vilification of the strange and the different. Let us create, instead, a culture of solidarity and common purpose beyond our differences. Let us declare our repulsion for the unfair and unequal society that blames its own victims and casualties. Let us revive our belief in the powers of democracy, fairness and social justice for the many. Let us establish a new set of rules, based on co-operation and reciprocity, in Europe's relations with all those countries where life – human and other – most often is the cheapest commodity. Let us accept that curiosity and learning from others remain the surest way of negotiating an unknown future.

Our appeal is as ambitious as it is simple: to see the concerns that face us all as the best basis for collective action, the guide for democratic politics in Europe; and to acknowledge the potential of living within difference in Europe as the best resource we have to responsibly confront the challenges ahead.

Well, it's time to toss "Dark Continent," but not the question. If there is a new Europe, what will it be? and who will be glad?