Two Pyramids: But we knew that.

So there is the picture of the Anglican Communion seen from the standpoint of the users:

The idea is that there are some 70 Million Lay People, a relatively small mass of clergy, and about 800 bishops.  If weight and power were given to the mass of people then the greatest power (the top of the diagram) would be laity.

If there was any effort to produce a body that was representative of the whole of the Anglican Communion the proportions would look something like this - many more lay representatives, some clergy and a few bishops. It would be some sort of triangle or inverted pyramid.

The Standing Committee of the Anglican Communion is not such a body. It looks more like this:

In this, at the top are bishops, and then clergy and lay persons (although truth be told it is neck and neck just who is in the lead, clergy or lay, but it's OK, bishops lead the pack in general.  Right now it looks as if top of the pyramid, the place of greater power, consists of 8 bishops, and the laity have 4, clergy 2.  That may change with new elections, but look carefully: bishops out weigh all the others combined.

So the traditional pyramid of power continues in force: the bishops are considered the lead, and the others trail behind.  The power pyramid may indeed be a correct description of the realities of power and influence in the Anglican Communion.  But it makes clear that the Standing Committee is in now way representative of the population of persons in the communion.

All of this is just fine, after all the Standing Committee is a sub-set of two other bodies, neither of which makes any pretense of representing episcopal / clergy / lay populations in any proportional way. And too we must remember that we are, after all, episcopally led / synodically governed. Fine. 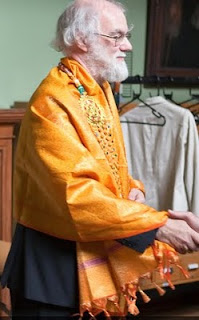 Still the trappings of power are indeed echoed in the reality that the bishops on the standing committee outnumber all the rest of the members combined, and of those there are several archbishops (five, but one has gone missing).  And just to make sure that the signals of power are not absent, we get to see the Archbishop of Canterbury decked out in a rather delightful scarf, receiving members of the Standing Committee for their meeting. The thing is, he alone is decked out in this way, perhaps just to remind us that at the top there is the Archbishop of Canterbury, the focus of Unity.

I think the current Standing Committee has a lot to do and I wish them well. But I am less sure just what it all means, except to say that the Anglican Communion is in no wise a body with any real leadership from persons other than bishops.