Here it is:  What readers have waited for. The real truth about the Anglican Covenant process of adaption. A handy-dandy flow chart. 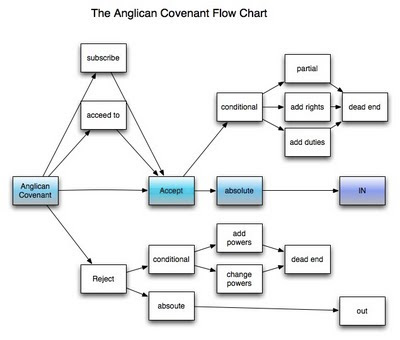 The observant reader will note that the ONLY process that counts is acceptance, as is (that is absolute). In which case the Church in question is in the Anglican Communion with all the rights and privileges appertaining thereto.
Any other path: rejection, in whole or in part, or acceptance in part or with reservations, leads to a dead end or simply out.
We are assured that not accepting the Covenant does not mean that a Church is not part of the Anglican Communion, but does mean that its level of engagement in the instruments of unity for the Communion are limited.
The chart however is meant to make it clear: acceptance (or subscription or accession or some other variation of adopting is the only way into the full life of the Anglican Communion.
All other hedging of bets is a dead end. And, of course, not adopting the Covenant means a Church is opting out of the full participation in the life of the Communion.
So let's get clear. Adopting the Covenant means we are in. Every other option means we are out.
Being out does not mean we are totally separated from the Communion, but only that we do not take part in its central governing structures as full participants.
Adoption has taken several forms: subscription, assent, adoption. The list of Churches that have said "yes" now stands as follows:
Ireland
Mexico
Myanmar
South East Asia
Southern Africa (almost)
West Indies.
Rejection has taken only one form so far, unofficial but well publicized non-engagement (the GAFCON primates):
Nigeria
Uganda
Kenya
West Africa
Tanzania
Rwanda
Southern Cone
They have signaled their disdain of the Covenant on several occasions, but I believe they have not individually as Provinces rejected the Covenant.
Everyone else is in process.


But the important thing to realize is that the only recognized process of becoming part of the new improved Anglican Communion, including participation in the instruments of communion, is acceptance of the Covenant, absolutely.
Now, who made this a reality?  Several of the Instruments of Unity themselves - that is the Anglican Consultative Council, the Primates and the Standing Committee of the Anglican Communion.
The demand that the Covenant be understood as the entry card into full participation in the Anglican Communion structures is a demand that comes from the designers of the Covenant  and the bodies that commended it to the Churches of the Communion for consideration.
The operant structural priming of the pump is this, (from the Anglican Covenant itself)  "(4.1.6)  This Covenant becomes active for a Church when that Church adopts the Covenant through the procedures of its own Constitution and Canons." That is, the Covenant begins to be operational as soon as some churches activate it. The churches that activate it, along with those in the current list of participating churches who are still considering acceptance, constitute the core of the Anglican Communion, vis a vis participation in various instruments, committees, commissions, etc.  So the Covenant is a self fulfilling prophecy.
All the other ideas - accepting against the day that we can change what we don't like (a moderate fantasy) or rejecting it in the belief that "they will be sorry" and change the Covenant to be more to our liking (a right wing fantasy) is a dead end.  Those who accept the Covenant as it is are the players in the new improved Anglican Communion.
Now suppose all the moderate and progressive Churches in the Communion signed on, just as they are (with women bishops and or primates, with gay clergy in stable relationships, etc), how long would it take other members to point out the moral dilemma in joining with fingers crossed?
No, dear friends, Jesus is right. Let your yes be yes and your no be no.
If you buy it knowing that in the present the Episcopal Church will be restrained by the Covenant from ordaining any more partnered gay persons to the Episcopate, or that we will be restrained by the Covenant from same sex blessings until such time as the whole Communion comes around, then say yes.
There are those who argue that if we come in as we are, and there are no nasty churches in the mix who will hold our feet to the fire on the matters of Lambeth 1998,1.10, or to the Windsor Report moratoria, then we can just coast. But we will be coasting on a don't mention it, don't talk about it, doctrine. That has its problems.
Otherwise, say no.
Posted by Mark Harris at 5/23/2011 11:08:00 PM