The National Council of Churches of the Philippines (NCCP) has for many years been a strong voice for social justice in the Philippines, a voice couched in the deep faith and courageous engagement with all sectors of society. In the recent past the Prime Bishop of the Philippines, Bishop Soliba, has been the Chairperson of the NCCP. The General Secretary of the NCCP has been the guiding officer for the work of the Council and plays a central hand in the development of the NCCP's wide program efforts which yield in everything from educational materials, liturgical helps, social programs and collective faith community stances on social and political issues in the Philippines and globally. 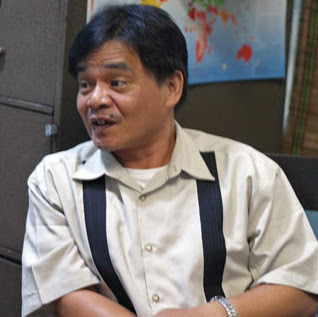 This past week-end the NCCP elected The Rev. Rex Reyes a priest of the Episcopal Church of the Philippines, to be its next General Secretary.

Here is the announcement of that election:

"As we bring to a close the 22nd General Convention of the National Council of Churches in the Philippines (NCCP), we are certain that this Council is in good stead as our newly elected officers have expressed their unflagging commitment to work for justice and peace, the locus of the ministry of this largest mainline Protestant organization in the country." Thus said Ms. Sharon Rose Joy Ruiz-Duremdes, outgoing NCCP General Secretary as the Convention ended yesterday.

Ruiz-Duremdes, a lay theologian, was the first woman to hold the post of General Secretary. She steered the NCCP in trailblazing efforts in its human rights and peace ministry. The NCCP grabbed the headlines in March of this year when it released a human rights report and formed a delegation called the Ecumenical Voice to air the issue of extra-judicial killings and other human rights violations in the international arena. The said efforts culminated in an unprecedented US Senate hearing called by Sen. Barbara Boxer to look into the issue.

Last November 16, the National Christian Council of Churches in the USA and the Church World Service presented an award of excellence to the NCCP for its "outstanding work in the areas of human rights protection and human rights advocacy in the Philippines." This is the first time that the award was given to a group/institution from outside the US.

Ruiz-Duremdes' successor is another first for the NCCP. The Rev. Fr. Rex R.B. Reyes, an Igorot priest from the Episcopal Church in the Philippines (ECP) assigned as Rector of Fairview Episcopal Resurrection Church, is the first indigenous person to take the helm of leadership of the Council. Fr. Reyes is the incumbent Program Secretary of the NCCP's Program on Christian Unity and Ecumenical Relations. He hails from Sagada, Mountain Province. He is the 7th general secretary in the Council's 44 years of existence.

Fr Reyes thanked his predecessor for the trailblazing efforts especially in the realm of international solidarity work. "We will endeavor to be more imaginative and innovative in sustaining the Council's commitment to the pursuit of peace and justice," he stated.

A statement on corruption and moral ascendancy, a statement on human rights, a resolution calling for the continuation of formal peace negotiations and a resolution in support of the calls for the Senate to reject the Japan-Philippines Economic Partnership Agreement (JPEPA) were among the major resolutions issued by the NCCP Convention.

During the closing rites at the IEMELIF (Iglesia Evangelica Metodista En Las Islas Filipinas) Church in Tandang Sora, Quezon City, the Prime Bishop Ignacio Soliba of the ECP and outgoing NCCP Chairperson handed the award of excellence in the field of human rights to his successor, Bishop Nathanael Lazaro (IEMELIF) as a symbol of passing the torch to remain steadfast in NCCP's peace ministry especially in the protection of human rights. The NCCP Convention was attended by 99 delegates from its 10 member churches and 9 associate members. The theme for the gathering was "Weaving the Patchwork of Justice and Peace in a Broken World" â€“ a theme that aptly describes NCCP's life and ministry. It was held at the Maria Antonia Paris Retreat House from November 21 to 24."

I have known Rex Reyes for many years and in my travels to the Philippines I have always tried to visit with him particularly at Resurrection Church, Fairview. That Church is a remarkable effort to be with and in a squatter community on the outskirts of Manila. The congregation is welcoming and filled with faith. Fr. Rex has been a great pastor to them and he will be a great pastor to the whole ecumenical community in the Philippines.

It is a happy event in the life of the Episcopal Church of the Philippines and I hope for Fr. Rex.