Anglican a better descriptor than Episcopal? Rwanda thinks so. 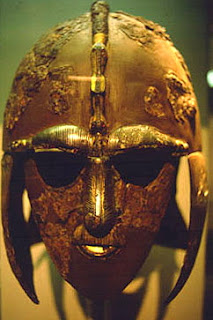 Some time ago it seemed that various Provinces or Churches in the Anglican Communion really found the word "Anglican" problematic, given that it derived from a word referring to the Angles of Anglo-Saxon fame. To the right is an Angle parade helmet from about 625 AD. Nicely fierce, no?

Some, like the Scots thought "Episcopal" might be a better sort of descriptor. It was an Episcopal Church, but of Scotland. The Protestant Episcopal Church in the United States of America thought, among other things, the same. There are a variety of Provinces that carry the descriptor: Jerusalem and the Middle East, the Philippines, the Sudan and as a joint name with Anglican, Brazil. Until last month Rwanda was "L'Eglise Episcopal au Rwanda," but not any more.

From the Living Church online:

"Delegates to the General Synod also voted to broaden and increase the curriculum of the church’s theological college in Kabunga. The changes are intended to transform the theological college into an academic university offering new degrees in a variety of secular subjects. Synod also voted to change the legal name of the church from the Episcopal Church of Rwanda to the Anglican Church of Rwanda."

So it appears that Rwanda would rather identify with a descriptor that identifies the church with a particular group of people, namely the English, or with the Church that grew from that, than with the word that indicates how they are governed - episcopal. The missionary work from which the Anglican Church of Rwanda grew was developed by the Rwanda Mission from England, so the name honors that fact. But of course England was a major colonial power in Africa and that must dangle there as a bit of an identity issue. (I know...Rwanda was not an English colony.)

Still, I would have thought that a Church that has distanced itself from Canterbury, and several of whose bishops are not welcome at Lameth, might think twice about introducing Anglican in to the name.

Perhaps too the descriptor "Episcopal" reeks too much of the Episcopal Church which TECR has decided is too decadent to associate with.

"Archbishop Emmanuel Kolini has called on churches in the East African region to fight against homosexuality for the good of the society during a crusade organised by the Anglican Church of Rwanda to bring together Christians from Kenya, Tanzania, Uganda and Rwanda.

The leader of the Province of the Anglican Church of Rwanda has insisted that Anglican churches in East Africa will not mingle with the homosexuals in the affairs of the church for the good of the community.

He says that they are reformed Anglicans who want to adhere to the original creeds of the Bible, and that’s why church has decided to ignore the 2008 Lambeth Conference because it has not done much to fight homosexuality in the communion.

If the Anglican Church of Rwanda has been at the forefront in evangelisation and peace building in the world, why not fight homosexuality?

He urged Christians to embrace the EAC with a united fight against this ungodly deed for it better free movements and interactions of the people of God across borders."

Kind of makes one feel better, doesn't it. It's OK, change the name so we don't have to be identified with this stuff.