A friend asked, "so what do you think is going to happen in Anglican-Land in 2008?" What could be finer on a cold crisp day in January than to prognosticate? Here then, from the safe to the risky, are my thoughts about actions in Anglican-Land this year of our Lord 2008.

I am pretty sure:

* The Lambeth Conference will take place as planned in July 2008. All but about 100 bishops will take part.

* The Global Anglican Future Conference (GAFCON) will take place in June, but not in Jerusalem.

* The matter of blessing same sex relationships and ordination of gay and lesbian persons will make it into the formal conversations at Lambeth under the heading of homosexuality or human sexuality. Lesbian and gay members of the church will not be invited to speak to the assembled bishops.

* Bishop Gene Robinson will be at Lambeth whether or not he is physically present inside the walls. Not to invite him in is absurd.

* As it shakes out perhaps ten percent of the members of the Episcopal Church will find their way out of TEC and into a variety of other church contexts. I cannot predict if they will be happy, but pray it is so. The remaining ninety percent will not be of one mind, of course, and will continue to kvetch and mutter our way into whatever it is that God has in mind for this creaky old boat.

* No matter which way the suits go, the body of believers that get left outside the building will find delight in beginning again and those inside will feel free of old nagging fights. It will be well finally for all their souls. We might all actually learn something from fresh starts and renewed communities (or is that only a hope?)

* Several bishops will be removed from the roll of the House of Bishops by deposition without their consent having declared that they are no longer under the authority of the Episcopal Church and its canons. Two will retire early, ask to be relieved of their inclusion in the House of Bishops (a la Bishop Steenson.) They will then declare they are part of some other Anglican agency (a la Bishop Bena) or going to Rome, or just bowing out.

* The Archbishop of Canterbury will stop believing that the "Windsor bishops" constitute a force for moderation. He will be right.

* The Archbishop of Canterbury will not stop believing that the Windsor Report is an item in the Anglican portfolio that has continuing merit. He will be wrong.

* The icon of solidarity in the Anglican Communion (Canterbury focus) will be the Anglican Covenant, at least during the tenure of the incumbent Archbishop of Canterbury.

* The icon of solidarity in the Anglican Communion (African bible-belt focus) will be the Bible.

* The icon of solidarity in the New Improved Anglican Communion, made up of Anglican Communion Bible Belt Focused Provinces and a range of North and South American dissenter Anglicans, will be the faith once delivered to the Saints."

* Progressives will try to live without icons but will be tempted to think of justice as an icon. They will have to work at overcoming this temptation. Justice is not an icon, it is an anvil on which the pretenses of our prejudices disguised as morality are finally annealed. 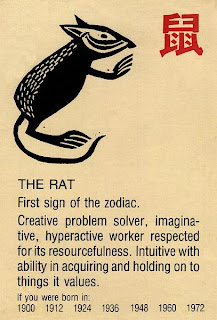 * All of these icons will be smashed because 2008 is the year of Rat. All sorts of prognostications derive from this Chinese year thing, most quite mad. Still, it was published in the Times of London online, so we might want to take a peek at Richard Lloyd Parry's predictions for the year. Strangely enough he has no predictions regarding Anglican-Land, perhaps because the basic engines of prediction (casting straws, inhaling fumes of bark and unmentionable substances, etc) all predate any concern by anybody about Anglicanism.

It is also the year of much less subtle rats: There will be a scurry of rats in the Church Yard, and the serpent will eat well. (see my "Snakes in the Churchyard" poem on this.) There will be signs of the oroborus all around, various Anglican conclaves and organizations consuming themselves, consumed by the fact that they exist only in opposition to what they hate. It will not be a pretty sight.

I am less sure, but lean toward the following possibilities:

* By virtue of hard work by a number of progressives there will be further work on a theology of Grace in creation that will contribute to an understanding of full participation of all baptized persons in all vocations to holy living for the healing of the world, a Gospel agenda.

* The best minds and hearts in both the dissenter and progressive Anglican communities will find new levels of communion, probably over coffee. A little child will lead them.

* The agendas and even the methods of those who see the issues as a division into church parties will pass (at least in part) from the scene and those who see a full rainbow of opinions as a gift to the church will bring new agendas, formed in an age that does not trust meta-narratives but continues to live in the faith.

* Those who can't stand the heat of this particular kitchen, who find Anglican-land's untidy ways intolerable, will move on.

Then there is the realm of rumor. I've picked these up 'round and about. They have very little traction:

* The Archbishop of Canterbury will retire following the Lambeth Conference.

* The Roman Catholic Church will make special provisions for an Anglican rite community and effectively reduce the Anglican dissenter community to protestant neo-fundamentalists.

* The Global South Anglican group will recapture its initial vision as a gathering of Anglicans from countries whose political, economic and social systems are in serious flux and development, a gathering for the purpose of mutual mission strategy. Brazil will be invited back in.

* The Archbishop of Nigeria will be disinvited from Lambeth before he says he will not come.

And, on a more personal note:

* Lily Anne (beloved Granddaughter) will lead the next generation of artists in the Harris family. I'm sure of it.