Readers may know that I am a member of Executive Council. As such I make some real effort not to report on matters under discussion by Council while it is session.

I do read what some blogs and commentators have to say about our meetings and I recommend the following to you:

(i) ENS has already filed several reports, some on the proceedings per se and some on the wider context of the meetings. The following have been posted on Tuesday: (i) On the resignations of four bishops, (ii) on suspending the search for a Mission Director, (iii) and Ecuadorians welcoming Executive Council. In the third of these the following comment was made, 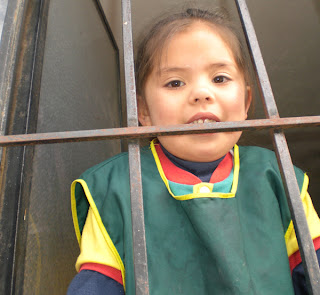 Genesis was at the window when we arrived and I got the picture of her that you see here.

(ii) The Living Church has Cheryl Wetzel as their reporter. She filed this report.

(iii) Cheryl also posted three reflections on the Anglicans United website. You can read them HERE. They are written from "across the divide" I suppose, but they are so well written and so charitable in their tone that I found myself thankful for her presence at the meeting.

In passing I note in the new draft Covenant (with which I continue to have some problems) a quite wonderful last line (3.2.6) "to have in mind that our bonds of affection and the love of Christ compel us always to seek the highest possible degree of communion." I continue to be caught up short by the realization that divide or no there are degrees of communion that amaze us all- or ought to.