Reynolds Price, William Stringfellow, and all the rest of us.

I have just finished a slow and leisurely read of Reynolds Price's, A Serious Way of Wondering. (Scribner, NY, 2003) It will drive the dissenters nuts, if they read it, and won't do much for the progressives. It is a deeply nuanced "serious way of wondering" about Jesus. It is well written; written with the kind of brevity of language not see often in the literature of Christian theology and ethics.

With Holy Week beginning way and the events in Anglican land this last week being, at the least, remarkable for their acknowledgment of the brokenness of community, Price's short book is particularly useful. This is not a book review. The book is short. Read it yourself.

I also finished this week William Stringfellow's The Politics of Spirituality. (Wipf and Stock Publishers, Eugene, OR, 1984, reprinted). 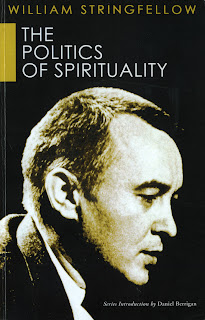 Stringfellow, compared to Price, is a hard read. The sentences are long, the pounding of phrase on phrase becomes an anvil beat of icy rage against the machine age. But beneath the glorious rant there is the same relentless search for the Word of God in the world of human action.

Both are men of great moral and intellectual stature. Both are great writers, howbeit that Reynolds is an artist and Stringfellow a craftsman. Both are intensely private people. Both are gay. Both inform my thinking in ways that do not allow me to separate out their exploration of the political and moral conditions that arise out of the focus on the Word of God, on the Resurrected Jesus Christ, from their personal witness. Reynolds styles himself an outlaw Christian. Stringfellow was an Episcopalian but one unlike most Episcopalians we might meet. He was at least for a time a regular paid up civil outlaw, harboring the criminal Dan Barrigan.

Reynolds Price gives a wonderfully strange account of his faith (collapsed a good bit to no one's honor save my typing skills) :

"My conviction of his (Jesus') absolute uniqueness is grounded, like Paul's on two broad feet – a personal visionary experience of healing from a dire illness and an early certainty that – in some entirely decisive, inexplicable, but likely palpable way - Jesus rose from the dead.

And to this day, I have no difficulty in reciting the traditional creeds…I came in early manhood to see that my own relation to God and his Son would best be pursued outside all churches. A mysticism that first appeared in my childhood, and was perhaps innate, was the strongest component in that decision…Any such feeling has quite rightly been recognized by the orthodox churches as suspect, even dangerous – prone to atrocious pride or trivial absurdity or to contact with forces other than God…

As I was awakening to the willful racial self-blinding of white Christianity, I also became aware of another blindness that was – if anything – even more inexplicable… Then in the South, and widely elsewhwere, many churches effectively ignored the plight of the poor…Then, more slowly, I grew aware that the churches' intolerance of any forms of sexuality beyond the traditional choices of marriage or chastity left me a literal outlaw. The men I'd love, who'd love me in return – we could only meet beyond the barring doors of churches.

When asked my religious affiliation…outlaw was an accurate description." (pp 116-117).

Price later observes (p 119) "I'm long sense convinced by his recorded actions – all of which are informed by a compassion that relents only for brief bursts of anger at his enemies – that by the end of his life Jesus had become almost entirely antinomian, against the Law: The Law of Moses and the laws which humankind has made."

Reynolds Price writes from the edge of the church but from the center of a faith that belongs both to the Christian mystic and an outlaw.

William Stringfellow's Politics of Spirituality leads us to a profound witness. "…Repentance is not about forswearing wickedness as such; repentance concerns the confession of vanity. For America- for any nation at any time – repentance means confessing blasphemy." (pg.62)

Stringfellow places the matter of moral right in the context of Incarnation. "…whatever else may be affirmed about a spirituality which has biblical precedent and style, spiritual maturity or spiritual fulfillment necessarily involves the whole person – body, mind, soul, place, relationships- in connection with the whole of creation throughout the era of time. Biblical spirituality encompasses the whole person in the totality of existence in this world, not some fragment or scrap of incident in this world, not some fragment or scrap or incident of a person. This book has no other aim than to commend, thus, the efficacy of the Incarnation." (pg 22)

Stringfellow would have looked at the current "troubles" in the Anglican Communion with amazement. How can leaders of Christian communities be so parsimonious in their fragmenting of whole people in a whole creation in a whole time not to even acknowledge the Incarnation of the Word of God in the whole people, gays and lesbians included?

I am struck in these impoverished days by the fact that I am reading Reynolds Price and William Stringfellow whose lives were slammed by great physical suffering and remarkable ability to witness from there about the saving character of the Word of God – that is Jesus the Anointed One – known in the enduring witness of the Resurrection.

I am also struck by the reality that I am informed by these two and by others who outlaws either to the church or in the world and many of whom, among other things, are gay or lesbian. I need to get with it and acknowledge that I am in their debt.

Turning to the Cross and walking to the other end of this week where we once again focus on the power of death, and then at almost the same moment on the revoking of those powers, I am constrained to say that enough is enough. It is high time we followers of the Word of God, incarnated in Jesus Christ and affirmed in the Resurrection, stopped mucking around in the partial, as if we could see plainly by doing so.

Those who have made being contra - homosexuality the cornerstone of their brand of so called "orthodoxy" have instead made it an idol and are blasphemers. Worse, in the light of the suffering of the world, the concentration of efforts to restore a purity to the community of faith by weeding out the queers discounts the realities of injustice, suffering and conversely the joys and delights of the creation.

I am committed to the Church and indeed to the continuation of the common life of the churches called Anglican. But I am finished trying to persuade by means of argument those who would disown, disallow, and malign the presence, leadership and moral courage of such people as Price and Stringfellow. It is beyond time to take Archbishop Tutu's stance, insisting that it is both a matter of justice and a matter of confidence that the Word of God will find us all both subject to judgment and to love, and that in the meantime we work for justice and mercy for all people and all creation. God will sort it out later, and is not fooled.