ACNA (Anglican Church in North America) has invited several notables to address its first synod in Texas this June. The speakers in morning sessions are: Pastor Rick Warren, pastor of Saddleback Church, His Beatitude, Metropolitan Jonah, the Archbishop of Washington and New York and the Metropolitan of All America and Canada for the Orthodox Church in America, and the Rev Todd Hunter, Director of West Coast Church Planting for the Anglican Mission in the Americas. 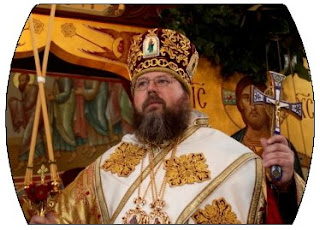 Of the three it is Metropolitan Jonah that drew my interest. He is Metropolitan for The Orthodox Church in America. Here are some interesting points drawn from his biography:

"His Beatitude, Metropolitan Jonah was born James Paffhausen on October 20, 1959, in Chicago, IL, and was baptized into the Episcopal Church. While still a child, his family later settled in La Jolla, CA, near San Diego. He was received into the Orthodox Church in 1978 at Our Lady of Kazan Moscow Patriarchal Church, San Diego, while a student at the University of California, San Diego. Later, he transferred to UC Santa Cruz, where he was instrumental in establishing an Orthodox Christian Fellowship."

"He was ordained to the diaconate and priesthood in 1994 and in 1995 was tonsured to monastic rank at St. Tikhon's Monastery, South Canaan, PA, having received the name Jonah."

"In the spring of 2008, the Holy Synod of the Orthodox Church in America elevated Fr. Jonah to the rank of Archimandrite and he was given the obedience to leave the monastery and take on the responsibilities of auxiliary bishop and chancellor for the Diocese of the South.

"Metropolitan Jonah's episcopal election took place on September 4, 2008, at an extraordinary meeting of the Holy Synod of Bishops. Earlier in the summer, his candidacy was endorsed by the Diocese of the South's Diocesan Council, shortly after he had participated in the diocese's annual assembly.

Metropolitan Jonah was consecrated Bishop of Forth Worth and Auxiliary Bishop of the Diocese of the South, at St. Seraphim Cathedral, Dallas, TX, on Saturday, November 1, 2008. On Wednesday, November 12, 2008, he was elected Archbishop of Washington and New York and Metropolitan of All America and Canada at the 15th All-American Council of the Orthodox Church in America, in Pittsburgh, PA." 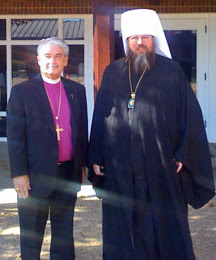 Metropolitan Jonah has ties with Bishop Iker with whom he met in November last year. Here the two are pictured together.

At that meeting, Bishop Iker said, "There are multitudes of our American people who have been wounded in the "culture wars," which have brought long-standing essential American cultural institutions – like the Episcopal Church – to doctrinal, moral, and institutional degradation and collapse.

The Metropolitan said, “It is my fervent hope that as the Orthodox Church in America, we can be a context of support for you and those communities with you that are seeking to realign themselves with Christians who stand fast in the Apostolic and Patristic Faith and Teaching.”

There is an interesting sort of parallel between the Orthodox Church in America and the in-formation Anglican Church in North America:


Here is one difference: while ACNA might look to the OCA as an alternative to the real step, which is to Rome, I bet OCA is not looking at ACNA as a step to anything.

OCA recognition of ACNA would give ACNA a different sort of ecumenical place, but good luck. The presence of Metropolitan Jonah at the meeting of the new synod will be interesting to watch. The Orthodox are no fools. There will be all sorts of polite diplomatic doings - mutual joy, delight in seeing this new church form, etc. But genuine full recognition will have to wait another day. Meanwhile, ACNA will play up the involvement of Metropolitan Jonah as yet another sign of its legitimacy, and the Orthodox will wait. They are good at that. Centuries roll off their backs like the green waters past our bows.