The Future of Anglicanism? Think again!

Here is what Robert Duncan, deposed bishop of Pittsburgh, Archbishop of the Anglican Church in North America (ACNA) , has to say about the future of ACNA and Anglicanism. (This in an interview with David Virtue posted on Virtueonline.)

VOL: What do you see as the future of Anglicanism in North America with ACNA?

DUNCAN: The only future for ACNA, as the only future for Anglicanism, is the kind of confessional Anglicanism as represented in the Jerusalem Declaration. The clarity with which the GAFCON/FCA primates have admitted me as a primate among them also reveals something of the trajectory we are on.

Let's get clear about this: The reason why Duncan is a danger to the future of the Anglican Communion is not that ACNA is or is not a success (Duncan now says ACNA represents 900 congregations - if you include AMIA and other mission partners).  It is not that he has gotten himself made an Archbishop of ACNA and gets to sit with some of the Primates of the Anglican Communion at a meeting in Uganda. 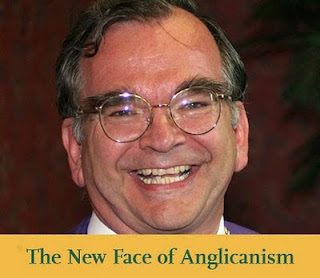 The claim that "the only future" for Anglicanism is confessional is profoundly dangerous. It is a power play of the worst sort.

Remember just what the Jerusalem Declaration proposes as a confessional Anglicanism: (For your convenience I have underlined some of the elements of this "confession" that are most troublesome.)

The Jerusalem Declaration
In the name of God the Father, God the Son and God the Holy Spirit:
We, the participants in the Global Anglican Future Conference, have met in the land of Jesus’ birth. We express our loyalty as disciples to the King of kings, the Lord Jesus. We joyfully embrace his command to proclaim the reality of his kingdom which he first announced in this land. The gospel of the kingdom is the good news of salvation, liberation and transformation for all. In light of the above, we agree to chart a way forward together that promotes and protects the biblical gospel and mission to the world, solemnly declaring the following tenets of orthodoxy which underpin our Anglican identity.
1. We rejoice in the gospel of God through which we have been saved by grace through faith in Jesus Christ by the power of the Holy Spirit. Because God first loved us, we love him and as believers bring forth fruits of love, ongoing repentance, lively hope and thanksgiving to God in all things.
2. We believe the Holy Scriptures of the Old and New Testaments to be the Word of God written and to contain all things necessary for salvation. The Bible is to be translated, read, preached, taught and obeyed in its plain and canonical sense, respectful of the church’s historic and consensual reading.
3. We uphold the four Ecumenical Councils and the three historic Creeds as expressing the rule of faith of the one holy catholic and apostolic Church.
4. We uphold the Thirty-nine Articles as containing the true doctrine of the Church agreeing with God’s Word and as authoritative for Anglicans today.
5. We gladly proclaim and submit to the unique and universal Lordship of Jesus Christ, the Son of God, humanity’s only Saviour from sin, judgement and hell, who lived the life we could not live and died the death that we deserve. By his atoning death and glorious resurrection, he secured the redemption of all who come to him in repentance and faith.
6. We rejoice in our Anglican sacramental and liturgical heritage as an expression of the gospel, and we uphold the 1662 Book of Common Prayer as a true and authoritative standard of worship and prayer, to be translated and locally adapted for each culture.
7. We recognise that God has called and gifted bishops, priests and deacons in historic succession to equip all the people of God for their ministry in the world. We uphold the classic Anglican Ordinal as an authoritative standard of clerical orders.
8. We acknowledge God’s creation of humankind as male and female and the unchangeable standard of Christian marriage between one man and one woman as the proper place for sexual intimacy and the basis of the family. We repent of our failures to maintain this standard and call for a renewed commitment to lifelong fidelity in marriage and abstinence for those who are not married.
9. We gladly accept the Great Commission of the risen Lord to make disciples of all nations, to seek those who do not know Christ and to baptise, teach and bring new believers to maturity.
10. We are mindful of our responsibility to be good stewards of God’s creation, to uphold and advocate justice in society, and to seek relief and empowerment of the poor and needy.
11. We are committed to the unity of all those who know and love Christ and to building authentic ecumenical relationships. We recognise the orders and jurisdiction of those Anglicans who uphold orthodox faith and practice, and we encourage them to join us in this declaration.
12. We celebrate the God-given diversity among us which enriches our global fellowship, and we acknowledge freedom in secondary matters. We pledge to work together to seek the mind of Christ on issues that divide us.
13. We reject the authority of those churches and leaders who have denied the orthodox faith in word or deed. We pray for them and call on them to repent and return to the Lord.
14. We rejoice at the prospect of Jesus’ coming again in glory, and while we await this final event of history, we praise him for the way he builds up his church through his Spirit by miraculously changing lives.

The Declaration has fourteen points, many of which are simply a paste-up of standard Christian understandings in mildly evangelical language. Some of the points are just bable. But in and among the points are several that are less benigne.   Billed as "tenents of orthodoxy" they are no such thing.

The "confession" of the notion of the bible's "plain and canonical sense"  which informs how it is "translated, read, preached, taught and obeyed" is certainly a witness - a witness to wrongheadedness and worse a disrespect to the Word of God which is embodied in the words but not limited in its fullness to the words written on the page.

The statement that the Thirty-Nine Articles is "authoritative for Anglicans today" is perhaps a confession of what the signers think.   The Jerusalem Declaration goes much further than the Anglican Covenant text which states, "The historic formularies of the Church of England[3], forged in the context of the European Reformation and acknowledged and appropriated in various ways in the Anglican Communion, bear authentic witness to this faith." In this case the Anglican Covenant text is a better read of the actual use of the 39 Articles. They are recognized as bearing "authentic witness to this faith." They are not "authoritative."

The same goes for the 1662 BCP.  It's not authoritative, rather it bears authentic witness to the faith.

The ordinal stands with the 1662 BCP. It is an authentic witness, but not "authoritative."

Items 11 and 12 are the crux of this so called "Declaration."  The only real declaration made by the Jerusalem folk is that (i) they will " recognise the orders and jurisdiction of those Anglicans who uphold orthodox faith and practice," and (ii) " reject the authority of those churches and leaders who have denied the orthodox faith in word or deed." That is, those who signed the Jerusalem Declaration will recognize Anglican bodies not now part of the Anglican Communion structurally and reject others on the basis of orthodox faith and practice (word or dead).

So it boils down to this: The Jerusalem Declaration says the Bible, the Thirty-Nine Articles, the 1662 BCP and the Ordinal are authoritative as they stand for Anglicans. They are dead wrong on three counts (the 39 Articles and the BCP/ Ordinal). They are misreading the Anglican sensibility of how Holy Scripture is to be understood.

In the end the Jerusalem Declaration is a power statement - we will join with those we wish and exclude those we wish.

The "trajectory" that the Primates from Africa and Archbishop Duncan are on may indeed lead to a new worldwide conglomeration, but it will neither be confessing nor Anglican.