I achieved Parity at 8:15 Friday night. 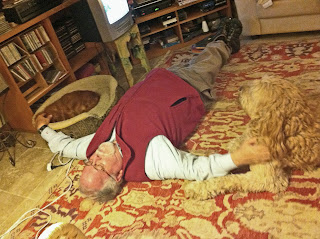 This is to announce that I achieved parity at 8:15 (more or less) Friday night, November 26th. Thanksgiving day was preceded with discomforting news on several fronts - the GAFCON dismissal of yet another "instrument of communion," the Church of England support of the Anglican Covenant, the continued silence on the war in Afghanistan, the events in Korea, and then more personally the discomfort of realizing that I am sometimes a pain to friends when I do not intend that.
All of that was followed by amazing times with young children who teach me about art and seeing the world, and the joy of family and friends at Thanksgiving.  And eventually it all balanced out.
On Friday night I achieved parity: the effort put out in the world concerning the problems of the world and all the issues of the Anglican subset of those problems, and the always surprisingly difficult engagement with friends, is met in simple pleasures and delights - turkey soup, corn bread, honey, dogs and children. Blessings on all and thanks for the yin and yang of it all.
My Son believes there is meaning in the Omega Man cross thing, and the electric cord. My daughter believes the dogs are symbolically the two thieves. My wife thinks I'm a bit around the bend, but then she took the picture. I was on the floor with dogs and my back was, for the first time, fully relaxed. All in all parity was reached.
Posted by Mark Harris at 11/27/2010 11:18:00 PM