Rebuild Our Church in Haiti, and other matters Haitian

Just 11 months ago Haiti was hit by a massive earthquake and an already crumbling economy, government and public infrastructure was reduced to rubble along with government buildings, offices, schools, churches, homes and even meager shacks. It all came tumbling down.
There have been all sorts of efforts undertaken to help the people of Haiti, but that help has not kept pace with the growing disintegration of the fabric holding together the nation as state or people.  Following the earthquake the summer hurricane with its torrential rains, the follow-up explosion of cholera cases, and now the difficulties of an election conducted under almost impossible circumstances and without clear results,  Haiti is increasingly in chaos.  A Haitian friend wrote me that in his 65 years in Haiti the chaos of the current situation seems most like the chaos in February 1986 following Jean Claude Duvalier's exit from Haiti.  His email yesterday to me was titled simply, "Fevrier  86."
In those dark days it was clear that all the players were playing out roles they had practiced for years, with no hope for anything new.  He wrote, "Locally, the political  leaders haven't changed their method of approaching the problems  of the country. ...The international community (USA and EUROPE) react as they did  in 1986,1994, looking again to their agenda in 1915 (US occupation)." Nothing new here.
In terms of aid, a great deal has been done, but much of the promised aid from international sources is still outstanding. Immediate health issues seem to be addressed, but larger public projects and massive rebuilding efforts still wait for funds.
There is so much to be done, and more there is a need to turn from the many destructive patterns of the past. When in 1986 Jean Claude Duvalier was taken by the US into exile in far France I wrote,
"The Duvaliers haunt the land; the father walks, the son laughs. The dictatorship lives in evil men, men who call torture good and justice a luxury.  The nightmare continues.  The country must end this cycle of terror. Now, all who hope for Haiti, and for themselves, must truly bury the Duvaliers, father and son, and the dictator spirits that haunt the land...."
The need to bury the past and find something new, something that is truly of hope, continues.
Of all places, Haiti is (quoting Lawrence Ferlinghetti, "perpetually awaiting a rebirth of wonder." It perpetually hopes for a new way, and at the same time experiences only the same old ways, again and again. 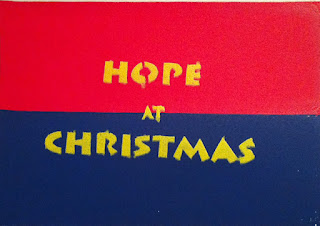 So this Christmas a small personal sign: our Christmas card is a silk-screen print -  the background colors are the blue and red of the Haitian flag, but inverse, as a sign of distress, and the overlay words are "HOPE AT CHRISTMAS."
It is of course what we all must find, hope in spite of the times and days we are in. But it is particularly to remind ourselves that hope is the great gift, and it is Christ who is the great gift, at a time when all seems without hope and the continuation of the same old habits of death.
And, as a wonderful gift this Christmas  the Episcopal Church Foundation has opened its site for the rebuilding of the Church in Haiti with the first hints of a massive effort to ask and challenge every Episcopalian to give so that the Church in Haiti might signal that it is rising from the rubble and again can be a sign of hope in that difficult and wonderful place.
Hope for Haiti will primarily be found when the Haitian people are lifted up, in our thoughts and prayers, and in our encouragement of their efforts to be a New Haiti, born of the promise of new hope beyond the boundaries set by the old orders of slavery, dictatorship, occupation and corruption.
It is a little thing, perhaps, to make an offering to rebuild the Cathedral complex in Port au Prince, but it is a bigger than we might imagine. In rebuilding the Cathedral and its school and clinic and orchestra and classrooms we are helping the Church in Haiti rebuild its common life.  Contribute to the Fund for Haiti, and give generously.
There is Hope at Christmas.
Posted by Mark Harris at 12/16/2010 04:54:00 PM