There is a fair amount of sensationalism surrounding the police account of the murder of David Kato in Uganda a week ago, mostly concerning the possibility that his murder was related to his not paying for sexual activity that he purportedly had with the accused murder.
If it is true it has the makings of a sad story. But the realities remain the same. He was murdered, he was the victim. David Kato may be a sinner, but it turns out that we don't regularly murder sinners, even if a local newspaper recommends he be hung.
More importantly he was an important advocate for the full inclusion of LGBT folk in the Church and Society and (of importance for those of us in Anglicanland) he was an Anglican.


"A gay man was murdered. In a country like Uganda, the motive could very easily have been his sexuality. This risk increases exponentially by his being a gay activist. Ugandan culture thinks homosexuality is a vile perversion. They debate prison terms and death sentences along the lines the west does for pedophiles. Naturally, the gay community thinks of him as a martyr for the rights of gay men and women.

The police report, (notoriously fabricated in countries like this) says he was murdered by the man he just bailed out of jail. Then there is the sordid motive put out by the police - non-payment for sex. Being a sceptic of of Ugandan "police reports" as well as of "gay activist martyrdom rhetoric," I suspect we will never know what the real situation was. Likely Kato was killed because he was gay, because he was an activist and because he abused a personal relationship (the #1 motive of the vast majority of murders) - but we will never know.

...
Whatever you viewpoint, Kato's death is a sad and tragic day for the gay and gay affirming community and it is a joyless one for the non-gay affirming community. No one that is truly human can take joy in another person's death and to accuse others of such a view is almost as vile."
Unfortunately it does appear that some people (perhaps the person speaking at David's funeral) do indeed rejoice at the death of the sinner as well as the end of sinning. And it is vile.


In a blog several days ago I said about David Kato's murder, here is what we know:
"(i) David Kato was murdered. There is nothing he has done or not done that makes it any less murder. He was the victim.
(ii) His witness and activism were important to the campaign against the Anti-homosexuality bill in Uganda and are reasons for his being well known. They are not reasons that justify in any way his death.
(iii) His death provides a context in which to raise our attention again to Uganda's anti-gay stance and the general obscenity of anti-gay laws, rhetoric, hate language and hate crimes found in many countries.
Whatever the reason for David's murder, it is a compelling moment, in which various religions and political leaders have spoken out against homophobia and hate mongering. That is entirely appropriate.
(iv)  He is a witness to the need for justice, but his death may not be directly the result of such witness or the basis of his witness. He may or not be a martyr.  The determination of that is for another day.
(v) The report of his funeral also gives us an additional witness to the level and obscenity of hate: His funeral was the occasion for a diatribe against gay people and gay activism and the abandonment by the "official" church of care for him or his family.
What is extraordinary is that he died convinced that the proposed anti-homosexual law was wrong and needed to be overturned, he died not having flinched from his witness by the sordid listing (with photos) of leaders among the LGBT community worthy of being hung, and that his death went officially unnoticed by the Church of Uganda but morned by many elsewhere in Anglicanland. 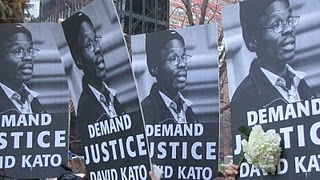 He lived in witness beyond the church, he died with his church being unwilling or uncaring in its response, he is becoming a marker in the long road to full inclusion."
To that I would add two things:
It may appear that there is some strange ethereal balance between those who would make David Kato a saint who was martyred, and those who would make him a sinner regrettably but not surprisingly murdered in his sinful situation. But there is not such a balance. The distinction that matters here is between those who believe David Kato's murder is wrong and those who believe it is some form of deserved judgment. Those who believe it is wrong will shout out that fact. Those who believe it is in one way or another his due will respond not at all.
David Kato was murdered. No one is suggesting some form of justifiable homicide although it would not be surprising if there will be the attempt by the defense to make it so. 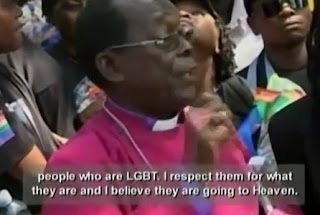 That the only Anglican clergyperson in Uganda willing to speak words of comfort at his funeral was Bishop Christopher Senyonjo, deposed for supporting gay and lesbian Ugandans tells us something of the prevailing mood: Apparently David Kato's death was considered unworthy of comment in Uganda Anglicanland. And given what happened to Bishop Christopher, perhaps there is some good reason for caution.   Thank God Bishop Christopher did not stop.
The latest news makes it easy for the Church of Uganda to simply continue in its silence regarding David Kato, his work and his life. But that silence speaks loudly.
But wouldn't it be wonderful and gracious and miraculous if just this once the Church of Uganda would step up to the plate and say, "We are sorry to hear of David Kato's quarrel with his accused murderer, but we believe this in no way justifies his murder. We regret his death and deplore the violence inflicted upon him."  It would be so very little and would mean so very much.
Posted by Mark Harris at 2/08/2011 04:43:00 PM