The news from the Middle East includes the war in Libya, the continuing conflicts within Iraq, unrest in Gulf states, in Syria, the reemergence of violence in Egypt, and the enduring and unending Palestinian / Israeli conflict.  None of this seems to have been of the slightest interest to the budget makers in Washington this last week and apparently none of the cuts concern foreign assistance in purchasing arms.
So we continue to provide tax monies to foreign countries so that they can buy weapons so that in the various areas of armed conflict there will continue to be "made in the USA" canisters left in the field, "made in the USA" weapons in the hands of various armies as well as some who are in revolt against regimes. And, worse of all, our money underwrites misery, death and destruction in precisely the places where we have spoke most often about peaceful compromise. 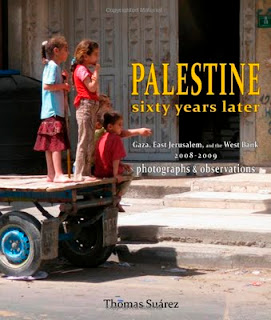 I have just finished reading an amazing photographic testament on the resilience of the Palestinian people.  Palestine, Sixty Years Later, by Thomas Suarez,  lays out in photographs and words the tragic human cost of the conflict between the peoples of Palestine and the government of Israel. One way or another the US is paying for, and often producing the weapons being used.
Everyone knows "it is more complicated than that" is the answer to every simple question about the exchange of bombing, gunshots, and missiles along the Israel / Gaza border. But here is a fairly simple question: is the US really up for having "made in the USA" on weapons, aircraft, and bombs be our signature presence in Gaza or the West Bank, forever?
And now, with the renewed repression of free speech in Egypt, are we really ready to have our arms shipments to Egypt with their "made in the USA" labels, our primary signature presence in Egypt?
But not a word is said in this outrageous and stupid process of the last week about any budget cuts in arms purchase, spending or funding.
Republicans and Democrats alike are righteous enough about how much they want to balance the budget. For this, they have had their reward. But their unrighteousness and unwillingness to consider the long term disaster at hand in producing weapons, or funding for weapons, for various repressions in the Middle East will finally come home and haunt us all. We will be the people who financed and sold the arms that went to too many countries who are at war with one another. And all that will be remembered about us is that the bomb that fell from the sky said, "made in the USA."
Shame on our Congress for stupidity and cruelty. Shame on us for blindness and our willingness to let it all go by.
The bombs are falling with our names on them. The bullets are shot and the shells have our name on them.
Posted by Mark Harris at 4/09/2011 11:48:00 AM