Haiti, that I love

I am in the midst of a short visit to Haiti, my first since the Earthquake, one of many since 1968.
First comments:

This entry is about Haiti, that I love.  How can I love Haiti?  I am not Haitian, I am not Kreyol or French speaking, I am not descendant from slaves (unless you go far back to where Britons were slaves), I am not of African descent. I have, in other words, no right to love Haiti as one of its own. But, I do.
I do because I have loved, cared for, been cared for by, and loved in return, by someone who is Haitian and for whom Haiti is the context in which Paul Tillich's "ground of all being" God was to be found. Through him I too found God in Haiti, and for that matter God anywhere.
Following the earthquake in January 2010, along with many others, I began to think about how to help, and how to get to Haiti myself. It was, well, important.  Not for the world, not for the Church, not for Haiti, but for me.
Realizing my own needs were not first in the order of things, instead of getting there I pushed for a generous and deep response from The Episcopal Church.  That notion was transformed by others into the Haiti appeal for the rebuilding of the Cathedral.  That worthwhile project continues. But our generosity must expand to include true companionship.
Recognizing that I had very little to offer the Haitian people in terms of immediately useful talent (medical training, PTSD training, etc) I have waited for an occasion to return again to Haiti.
That occasion came with my friend's announcement that he was now ready to have me come stay with him in his home. His house had been destroyed in the earthquake and although I asked if I could come and help he put me off until he and his wife could receive me into his home again, in some comfort.
So, this week I have been here, guest with Yvan and Cecille, in the plane area near Croix-des-Bouquets. And I am astonished by all I have seen, heard, experienced and lived.
The Astonishment: 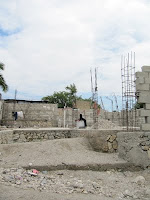 Everything I have heard, have seen in writing or pictures, have received in terms of reports, say the same thing: the Earthquake, and the Hurricane and Cholera outbreak, have left Haiti an absolute disaster. The tents and camps, the food shortages, the bad water when there was water, the sanitation problems, the disease, all on top of the staggering death toll and the huge numbers of wounded, are a reality.  These were combined with the terrible and often incompetent efforts of governments over many years that have left Haiti with little infrastructure, declining commerce, no stability, and finally the spirit-crushing reality of death by disregard. The results are a disaster. 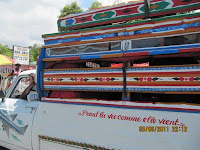 And, of course, some of that is true. But we don't hear much about the people of Haiti rising to help one another. There is a sharing and a common struggle together, and that came first and continues.  The people are alive and active in their own salvation.
And there is something more:
There is a visceral spirit, a stretching of new sinews and furthering the reach of the peoples of Haiti.
There is an economy of the poor that is overtaking all the best-laid plans of international aid organizations, governmental offices, and non-governmental organizations.
There is money in Haiti - not enough to meet all the material and infrastructure needs of a working state, but money. It filters down not only by way of programs for communities, but by way of a tourist trade made up almost entirely of church and civic aid workers. The money comes by way of NGO and International Aid agencies bringing staff who buy cars, employ people, set up dispersal centers, and generally establish space for themselves.
.  It comes by way of highly paid experts, planners and agency managers.  The money comes in the old way by some one who knows some one who knows an uncle who has a daughter who works for the director of this or that office.
It comes also by the Haitian diaspora sending home paychecks and the partners in a million and one agencies sending monies with obligations attached.
And, truth to tell, there is the hidden money of the drug trade, the people for sale trade, the oldest protection scam of all, the wage slave exchange which turns eager workers into a servant class.
The money is there, and even if everyone at the top is taking their cut, there is still the filter down of some money into the system.
More, there is, as always, the enterprise of the poor. 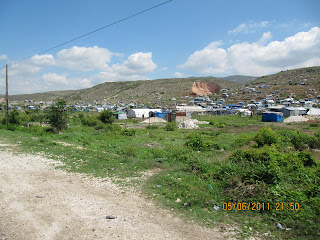 The tent camps, some large enough to be new communities, are often on so called "public land “which is not public at all but governmental. Now that the public is landed there in squatters and NGO camps, some are determined to stay in the hopes that many who have never had property before can one day claim the small parcel where they have landed in the post earthquake world.
There are even more contradictions than ever in Haiti.
There are gangs ruling parts of Cite Soleil, but now for the first time in memory there is a police force that is not a gang itself. This latter fact is a remarkable gift a land of disaster and repression.
Many of the schools and institutions have reopened in makeshift buildings and scattered small offices rather than centralized management from now destroyed buildings. Major institutions are beginning to resemble the multitude of small one room schools of computer skills, kindergartens and colleges of secretarial and language study.  The earthquake made agencies more – horizontal. 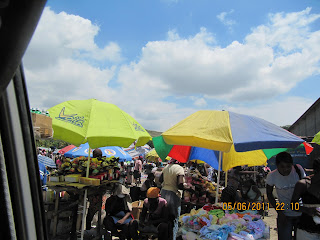 There are huge open markets now found not in the center of Port-au-Prince but on its edges. Somehow the food from the countryside still makes it into the life of the metropolitan centers.  There are beginning to be more and more small grocery stores reminiscent of older local markets in the US. 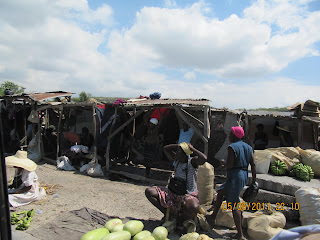 There are auto showrooms with fancy frontage and the usual street vendors, but not now in specific neighborhoods of the old city, but spread around in what appears to be the abandon of people living in the rubble and at the same time scattered.
The major streets seem cleaner than before. When the rubble was removed so were the mounds of garbage that had build up through non-caring or under-funded state and municipal administrations.  There is still mounds of rubble where buildings had been.  There are still the great slums and new ones in the making. 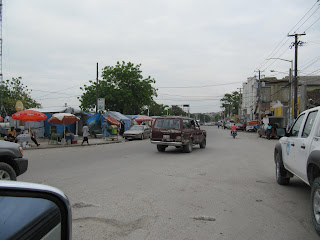 Some of the roads are good, some terrible, all congested even with the high cost of gas and diesel.  Electric service is shaky and in outlying sections of Pout-au-Prince almost nonexistent. (My friend's house has been without electricity for ten days now.)  But there is ice for sale, water to buy, food on the shelves, staples of rice and beans and corn coming in from around the world.
Clinics abound, hospitals have continued to work and are expanding. It is still not a good place to get seriously sick.
Haiti continues to be a land of contradictions, a land of great poverty, a land of many blessings and many curses.
Haiti, at least in my experience has always been a mess. It remains so.
Yet after the earthquake there has been a sense of pause... Is the mess just that: a mess, or is Haiti in the desperate last gasps of a failed state, a failed experiment, where those who can leave, and those who can't suffer? Is what is happening somehow a curse from a tired God, a worn out way of being, or worse the judgment of forces bearing down on Haiti?
Terrible things were said from outside about the earthquake being God's judgment. Those things are despicable to anyone who believes in a God of justice and love.
But terrible things are also said not about God's judgment but about Haiti's ability to govern and run its own affairs. And some of them are perhaps with merit. Certainly the international community and even the agents of the Haitian state seem to think so. Decisions on reconstruction are being made by councils of foreign and domestic overseers who claim to know what is best for Haiti, better than the people know.
I do not see or hear much about citizens committees, people power, organization from the bottom up. Their voices exist but are apparently not taken seriously. All is apparently being done to and for Haiti.  But the economy of the poor and the dispossessed is still there, still operating on the street and in the market and in the country side. There is movement from the bottom up.
And more, I have seen in the eyes of those who lost friends and companions, family and community, a strange haunting pain for death and destruction experienced and known. Haiti has seen death, and yet Haiti is alive. Haiti is alive and strangely well.
The energy and work and survival tactics and abilities are there. The elements of civil and social life are there.
Young people gather and listen and dance to music every bit as full of hip-hop themes and social commentary as elsewhere in the world.
The public marketplace of ideas permeates the airwaves, both radio and television. The free expression of ideas is rough and tumble.
The desire to make sense of life is there. The hope for the blessings of life in Haiti is still a possibility.
Perhaps is it is only that I love Haiti. But I believe the rumors of its death are greatly overstated.  Deep in the lives of the people of this land, a people who suffer for any freedom and peace each day, is the residing faith in Haiti as a pearl of great price, whose value is known only to those who are the true children of Haiti.
Well. These are poor reflections, but all I have for the moment.
Haiti continues, the struggle continues.
Haiti, that I love, be in turn a land of a people who love life and peace and find it, now and in the future.
Posted by Mark Harris at 5/08/2011 08:48:00 PM