What promised to be a simple thirty-six hour step - out - the - door sort of trip to an ordinary american city for an ordinary meeting of church folk has turned into a kind of dance macabre and song of unrequited desires for simplicity. Oh well...
Thursday I was to make a promised telephone conference with the Presiding Bishop at 10, so at 10 I dialed up the Church Center and got a recorded voice that suggested that if I didn't know the four digit extension for whoever I wished to reach, I could type in the first three letters of the last name. After failing the "Jef" or "Sch" options for the Presiding Bishop, I went on line and found the numbers of the various members of the Presiding Bishop's office. I worked my way down the staff list in her office until I finally got Canon Robinson who immediately patched me over to Bishop Katharine.  We had a good conversation and the frustration of it taking eight minutes to reach a live voice at the Church Center faded. But I should have taken this litte quirk a sign of things to come.
All of this was in preparation for going to the UTO Board Meeting in Indianapolis. I was all set to go the the evening of the next day (Friday) believing the meeting our committee had with UTO  to be Friday night and Saturday. That of course turned out to be wrong.  I got an early evening text message from one of the members of the UTO Study Group who reported that she was already there, as was the other member who was going to join us.  Suddenly, it became clear that I miss understood the day we wer to meet, by a day.
After all the necessary grovel stuff (grovel, grovel, grovel) the reality of the current air passenger situation became clear.  I could not change the times because all flights are booked solid.
Now at that point I should have decided to hide until the flux in the universe had smoothed out, my flux capacitor unit not working as well as it could.  But I didn't.
So the plans changed, and in terms of the meeting with UTO all worked out for the best. The session with the UTO board was changed take place the next night, and I was set to arrive just in time. I did, but without the directional skills of the taxi driver in Indianpolis who eventually got me there with help from my handy-dandy iPhone GPS app.
All went well with the meeting and the next day I got a chance to see the board acting as the grant committee. It was impressive.

All was set for the return flight on Sunday morning. I made reservations with a private car company, the van company having no room that morning. So at 6:45 AM while the citizens of UTO were asleep (regretably) this massive stretch limo, black, the required four windows on the side, longer than my  room I had at the conference center, pulled up. It seems the driver had taken a large group to the airport earlier and just used the same "luxury model."
I got in and this is what I saw: 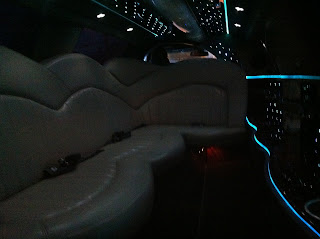 It was the pimpmobile special, and I was very much out of sync. No disco music, no wide lapels, no party girls, no whiskey, nada.
At 7 in the morning it was a bit much.  Still, I thought, this is going to be a great day...after all I started out in a neon alternative universe. What could go wrong?
Indeed, what could go wrong?
Well, it turned out a lot.
I got through security and onto the plane, a smaller airbus model, and we took off. OK. There was the often heard minor whine of various hydraulic systems as wheels went up and flaps were adjusted.  But the noise continued, got stronger, and went on and on. Suddenly the steward got up from the back and went forward and telephoned into the cockpit. Then the captain came on and announced that we were turning back to the airport with a failure in one of the hydraulic systems and that landing should be perfectly fine, just don't mind the fire trucks which were as a precaution. (I didn't like the sound of that!)  He said that landing would be fine, but he couldn't steer once we landed so we would have to be towed in to the gate.  It was all very reassuring but somehow cast with just an bit of underlying disease.  What would happen if the landing caused the plane to veer to the right or left? What then?
Well, all was calm, all was bright. (I had said a prayer or two round the "yon Virgin mother and Child") The landing was perfect. The people on the plane were very relieved. Here we were just after landing. (Left)
So back to the airport and a four hour wait for the next plane out to Charlotte, NC and on to Salisbury, MD. Food at both airports was mediocre and expensive. Got home about 11 PM.
So all I can say is that the Jet Set two-step sometimes leads to strange and unquiet dances with unspoken trouble, bordom and sleaze.
I am immensely grateful for the skills of our pilot. I am less enthusiastic about airports, and I am really left wondering if the whole travel thing has become a nightmare in the making.
Perhaps its just that I am a bit tired. Hope so. Tomorrow I leave to go to Haiti for a week. At least I know what to expect: Miami Airport is a zoo and PaP Airport is a mess.  In this sort of dance, knowing what to expect and meeting expectations is everything.
Posted by Mark Harris at 5/02/2011 10:46:00 AM