One Hundred Fifty Years ago Today...Father Holly taught the band to play. 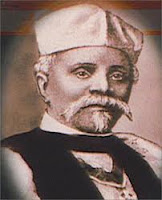 Bishop James Theodore Holly, then Fr. Holly, arrived in Port-au-Prince one hundred fifty years ago today.  On May 26, 1861 he, his family and a small community of free persons of African descent came to Haiti where they intended to make their permanent home. Within just a few months Holly became a citizen of Haiti. He lived and worked in Haiti until his death in 1911.  His ministry, first as priest and then as bishop of Haiti is the beginning of two Anglican Communion bodies, the first the Orthodox Episcopal Church of Haiti, the second the Diocese of Haiti, part of The Episcopal Church.
The first represented his ideal - a national reformed catholic church in Haiti, part of the wider Anglican Communion but distinct from The Episcopal Church whose American racial attitudes were only minimally distinguished from those of the whole American white society.  Holly was encouraged in his work by American church leaders and his ordination as a bishop was a singularly important step for The Episcopal Church in that it was the free offering of the historic episcopate to a national church effort in another country, in some ways a mirror of the gift given The Episcopal Church by the Episcopal Church of Scotland and the Church of England. From the outset the Orthodox Episcopal Church in Haiti was self-governing. It was not financially autonomous. It was not without wider synodical oversight. Holly depended to some extent on support from sympathetic American churches and his ordination was contingent on there being a small panel of bishops who would provide a synondical link to the Communion. In this Haiti was much like Cuba in the current Anglican world - an extra-provincial diocese with synodical attachment by way of bishops who are linked with the church in Cuba.
But it must be said that Holly understood his work to be the establishment of a national church in Haiti, a church (as in the US) for the nation.  In that respect the church under Holly's direction was to a very large extent self governing.
The Diocese of Haiti website has a history of the church in Haiti and states that,
"En 1875, la liste de la convention de l’église épiscopale- haïtienne accusa un Evêque, 10 prêtres, 4 diacres, 1000 baptisés, 250 communiants, 18 missions.  Mercredi 15 mai 1875 l’église fut convoquée en vue de la ratification de la convention ecclésiastique signée entre l’église Orthodoxe Apostolique haïtienne et l’église épiscopale des U.S.A. Il faut se rappeler que l’Eglise Episcopale d’Haïti, auparavant était une Eglise Indépendante, autonome.
The Church in Haiti was understood  to be an independent, autonomous, church, related by concordat to The Episcopal Church.
Holly was also the initiating bishop for what would become the Diocese of Haiti (first the Missionary District of Haiti), although full incorporation into The Episcopal Church happened after his death (He died in 1911 and the church became a missionary district in 1913).
When the Orthodox Episcopal Church received and made the Missionary District of Haiti, the Church in Haiti ceased to be self-governing. Its bishops were chosen by the House of Bishops of The Episcopal Church, its budget was supervised and funded by the Domestic and Foreign Missionary Society, and its direction was set by the missionary principles of the sending church. To the great credit of the DFMS and The Episcopal Church strong episcopal leadership arose, and particularly in the episcopate of Bishop Charles Alfred Voegeli, the church expanded and raised up Haitian leadership, both ordained and lay.
Holly's missionary stance was formed from several convictions. Mdm Cecile Francois, writing about his work listed the following:


a)    An unshakable faith and total dedication.
b)    A strong emphasis on the Laity
c)    An ecumenical vision of the Church
d)    An evangelism that takes in to account the full range of human life.
e)    The vision of a self  governing  church.
The last of these, "the vision of a self-governing church" incorporates something of what we mean by autonomy (he certainly meant a distinct church for the nation of Haiti). He did not mean fiscally autonomous, and he did not mean autonomous in any sense of being a "stand alone" bishop divorced from any wider synod.  Holly's vision of autonomy was, as near as I can tell, a matter of building a church of the nation and for the nation, taking in the full realities of life in Haiti. It was autonomous in that its call was to a specific reality that was its own - Haiti.
Now 150 years later there are continuing and new conversations about just how to re-envision autonomy for the Episcopal Church in Haiti, an autonomy that acknowledges its special calling to be the church in that place and at the same time recognizes its interdependence with the wider Communion and with The Episcopal Church.
Perhaps it is time for Holly to land again, for his vision to be taken up.  For this to happen there will need to be generosity of spirit and courageous action exercised by all who love Haiti and the Church.
Posted by Mark Harris at 5/26/2011 10:06:00 AM