Just You Wait: A Homily on Justice at the hands of a caring God.

(Well, for what its worth, I preached again at St. Peter's this last Sunday.  I've been thinking again of the difficulties of the times when justice and God seemed distant while we as a people struggled to deal with our own injustice and own blindness and the horrors they entailed.  In some ways remembering those struggles reminded me that the struggle continues into this hour and time.  Here it is.) 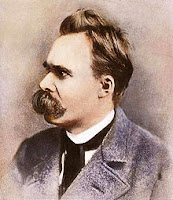 Back in the mid 1960’s an idea dating from the latter part of the 19th Century in Nietzsche’s writings reemerged, namely the idea that “God is dead.”  It made the cover of Time Magazine, which was at that time a sign of some importance.
The Death of God debate was mostly about two issues: (i) That the notion of a transcendent God made no sense in a world where everything was viewed in terms of its physical and biological context, without reference to any non - “material” reality, and (ii) the notion of a just God made no sense in a world of holocaust and war. And a God who is neither just nor transcendent is in effect no God at all.  So to say “God is Dead” was to say that transcendence and justice were defunct ideas and that the mechanical / biological grind was all there was, and led to a place of cold and motionless death. Entropy and mindless order were all there was. That and war. There is more to it than this, of course, but this is a homily, not a lecture!
The disillusionment of the mid 60’s was no hippy thing. It was an existentialist thing. It was a product of the horrors of the global war of the late 30’s and 40’s, and a product of the idea that humans were defined as economic entities to be bought and sold in the world of commerce rather than as persons of intrinsic value who cannot be bought and sold, but could stand apart from the apparatus of the marketplace or the state. It was a disillusionment that produced alienation, and humans alienated from both productivity and from the promises of capitalism and communism were increasingly clear that God had abandoned them to a cold night of indifference.
The Church in a variety of ways contended then as it does now that God is both transcendent and immediately present, and justice is real and of great value, and that for a whole community of people – God fearers – God is not dead at all, but only undervalued, understaffed and often unemployed.
One of the great slogans from that time stick with me.  It was used in a liturgical context – in the Eucharist.

A Christian community in San Francisco developed a service of Holy Communion, much like the one we use today, but about where we proclaim, “behold the Lamb of God, who takes away the sins of the world” this community asserted boldly, “God is not Dead, God is Bread, and the Bread is rising!”
Now in the context of that liturgy the assertion that God is bread was full of possible meaning – God who is transcendent is immanent in the bread that we share,  or (following a remark by Gandhi that in these days God would not dare come except as bread) God is present among us as bread, or in a hungry world bread is what we worship. There were many ways to cut that cake.
But perhaps the most interesting bit of the slogan was the assertion, “The bread is rising.”  Preachers of a certain sort  (I was one) were given to using this phrase meaning that WE as God’s people are both the bread that feeds the world (in Christ’s name) and we are rising up and that God’s justice will be done.

So the slogan attempted to encourage the listener:  “God is not Dead. God is Bread” (and here the description of the manual acts - you hold up the bread, just consecrated – usually a big loaf). “And the bread is rising.”  (And here you break the bread and there is an abundance of bits and pieces, large hunks and crumbs….) It was a work of liturgical genius, but unfortunately known in only a few liturgical communities.
_____________
The Gospel this morning is a series of sayings – they are called parables here in Matthew: The parable of the mustard seed, of the leaven in the lump, of the hidden treasure, of the pearl beyond price, and of the net with good and bad fish.  What is common to these is the beginning phrase, “The Kingdom of Heaven is like….”
“The Kingdom of Heaven” is a theologically clever way of not having to say “The Kingdom of God” thereby using the word or the name of God too often. Matthew uses this phrase often where other writers use “Kingdom of God.”
These things are announced as parables, but on one level they are similes - A is like B, -  “Crazy like (or as) a Fox.” But they are not quite similes either.  They compare The Kingdom of Heaven (or of God)  to something. But note that the “something” the Kingdom of Heaven is compared to is not a thing, but an activity. The Kingdom of Heaven is like …doing something.
Look at the active words:
Sewing, growing, mixing, leavening, hiding, finding, selling, buying, searching, throwing, catching, throwing out, keeping.
Note too that the “things” that are mentioned are overflowing or abundant: a seed that becomes a great bush, flour that rises, great treasure, valuable pearls, great heaps of fish.
The Kingdom of God is like…? Like what? The Kingdom of God is a world of action – of growing vibrant daring things done by those of us in that Kingdom. The Kingdom of God is action and great abundance.
The Kingdom of God is like … Bread, and the Bread is rising.
These parables are so short as to be almost slogans for action:
Be a mustard seed, surprise the birds!
Be yeasty, get into everything!
Be clever, and go for the Prize!
Be daring, settle for nothing but the best!
Pull everyone in, later we can throw out the bad!
The Kingdom of God, friends, is about abundance and amazing possibility.
Now, in Jesus’ time, and in our time, such talk is not, well, normal.  For a depressed and alienated people, when it seemed all was lost, and God was dead or dreadfully underemployed, Jesus said, just you wait! It is all about to explode with possibilities for God active in the world and justice done.
It is not normal, but it is our hope.
You of the Kingdom of God, We of the Reign of God: We are little now and may seem worthless, we may seem without hope and alienated and alone in the cold, but just you wait.
The Kingdom of God is like this:  Just you wait, it (and we) will flourish.
We read this morning from Paul’s letter to the Romans. “I am convinced that neither death, nor life, nor angels, nor rulers, nor things present, nor things to come, nor powers, nor height, nor depth, nor anything else in all creation, will be able to separate us from the love of God in Christ Jesus our Lord.” (8:39)
Those who say there is only the survival of the strong, that there is no justice greater than the state and its power, that there is only the reign of death and the long slow crawl toward cold and motionlessness and nothing, are wrong.