Ruminations on the way to a major storm.

Well, in the little town on the edge of the bay and the big water the writer of Preludium was supposedly forced to go to the toy store on Second Street where he found snakes, 25 cents per. So of course he bought ten and brought them home. As in a dream it came to him to put together a tableau, a prophetic muttering, appropriate perhaps for difficult times.
It is unclear if the onslaught of Hurricane Irene is or is not about difficult times.  It is not about sin.  If it presents difficulties is is because the forces of wind and water are great, and we are small by comparison.
So, I wonder just what the vision in this tableau is about?  Perhaps it is a representation of the hope that beings and forces might be convinced to act differently than expected, if only the new Child gave them new reasons to throw off old ways.
If the Lion and the Lamb can lie down together (without one being a meal for the other), if snakes can be convinced not to strike the foot that falls too near, perhaps the storm can become a source of blessing and not a curse.
Then again, perhaps the tableau is only a plaything for Mad Priest and his readers. That's OK too.

The good boat Amity has storm lines lashed to cleat and dock and there is talk of a retreat from the beach Saturday. More later. For now, goodnight Irene. I'll see you in my dreams. 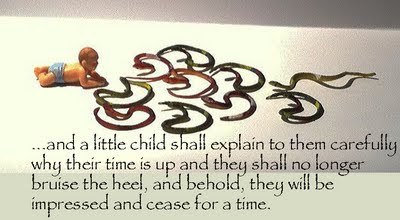