After a long gestation period The Episcopal Church new web presence has been birthed.  It turns out there were twins, or triplets, or wait, perhaps quadruplets.

First to arrive was the new Episcopal News Service site which all in all is more or less like the old one, except for a font that I find unsatisfactory. It goes by the name, "episcopaldigitalnetwork.com/ens". 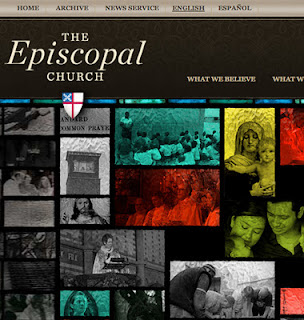 Then came in rapid succession a facelift of "Episcopal Church" "episcopalchurch.org" which is much better organized than the older site, but with a "stained glass" banner that takes up a lot of bandwidth. The old complaint that it was hard to find things like a staff directory are gone. You can search the site from a box and not simply get old news items, you can click on "who we are" and find Staff Directory right there. Good changes.  It takes a bit of getting used to, but it seems much more user-friendly now.

"The Episcopal Digital Network is an ad-supported media network that delivers news, information, and branded entertainment to church leaders, members, and general audiences. The network creates goodwill for the Episcopal Church and receptivity to the message of Jesus Christ by providing timely, accurate, and useful information to our audiences and by delivering value to our advertisers."

ENS is a subset of EDN, so maybe ENS should not count as a separate item.

There is another piece out there, the Daily Scan, which is a product of TEC public affairs. This is an email directed service, with a web version.  But it too has undergone a face lift and its banner now reflects that of the Episcopal church website.

What we have here is a variety of services apparently open to including stuff from the wider episcopal church world in blogdom, webbing, etc.  Panarama mapped out under two headings: Episcopalchurch.org and Episcopaldigitalnetwork.net.


Of course there are unanswered questions: The site offers a subset of files,"Panorama: Blogs of the Episcopal Church" points to some fine blogs indeed, but why those in particular and not, say, "Preludium" or better yet "In a Godward Direction" or "Leave it where Jesus flang it?"  So, I wandered over to "social media," which turns out to be mostly tweeting, with links to some other sites. Then, just for fun, I clicked on the "Donate to the Episcopal Church" and the list was fine, but didn't include a button to click on for Rebuilding the Church in Haiti. Then I looked at "I am Episcopalian" and that has changed into what is apparently a running long video that plays "channels" which are the old short videos. Not all the old ones are listed yet, but the idea is there. I wonder if this series would be better used if one of them at at time might appear on the front page of the website as a witness? After watching three or four I have heard enough for one day.


So there are odds and ends to work on. The Communications office noted that this would of course be the case, given the size of the task. True enough. But even with the bits and pieces of pesky stuff it is still an important new start.

It is a massive undertaking and the results are mostly positive.  Congratulations to all who are working on this. Now to take the twins, triplets, or whatever on a walk....