Hanging out with the Philippine Independent Church 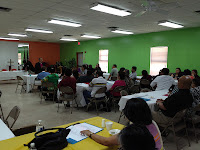 I am writing this from the back of the meeting room in the parish house of the Cathedral of Jesus of Nazareth, Tampa, Florida, where the election is just now happening.

The people of this new eastern diocese have been meeting here for two days looking at issues of migration, human trafficking and global economics and migrant peoples. It is a joy to be at a church meeting where issues of social and cultural importance take central stage! And, given the widely dispersed parishes of the PIC in the US, there was the need to renew friendships and develop new ones.  Last night we had a party - roast pig, great food, dancing into the night, wonderful community time.

Now The delegates from the parishes in the East are being called up one by one to register their votes, the whole group first singing "Come Holy Spirit, our souls inspire..." 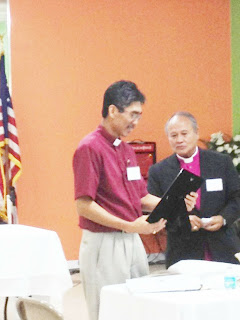 Bishop Robert Ilay, the interim bishop of the diocese was elected at 2:15 PM EDT. Here he receives a gift from the whole church from Bishop Vic Esclamado, President, Supreme Council of Bishops, IFI (PIC). 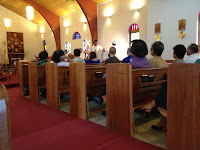 Each morning we have met for Eucharist (Mass) in the Cathedral of Jesus of Nazareth. The service is about 90 per cent the same as in the BCP (US) 1979.  The hymns are in Tagalog and English, There are some wonderful inclusion of some Rite One prayers, slightly modified, into a Rite Two liturgy.

I am here because I am on the Concordat Council, that reviews the concordat between the Philippine Independent Church and he Episcopal Church. I will report out on that meeting later.

But for now I am grateful for the opportunity to be here among new friends and old. The Obispo Maximo, The Most Rev. Ephraim S. Fajutagana, is some one I met twenty years ago in the Philippines.  He continues a tradition of wise and caring clergy called to this position.

The relation between our two churches - the PIC and TEC - is a product of considerable generosity of spirit on the part of both churches, and the hospitality and friendship between the two churches is evident on the ground.  May it grow and produce even more generosity in the future.