Words fail, which is why we yearn to make other marks on the wall..

Words are a notorious failure as carrier of depth regarding feelings of love.  Only the rare love poem rises above the background noise of Hallmark Cards and related mush. I ought to know, I've written several miserable poems on love myself.  Mine mostly fail to satisfy the reality that love arises from longings and responses that are too primal to put words around. So in desperation we turn to other ways of making marks on paper or the wall, ways that are full of visual metaphors and related hints.

Leonardo Ricardo, on his blog, Eruptions at the Foot of the Volcano, has just posted a piece on Dr. Paul Semugoma, who, in Uganda, has come out as gay.  The bravery of that coming out and the importance of that to all those in Uganda working for a more open and inclusive society against great odds is astounding. Read LR's blog HERE.

Most of us don't find our expressions of feelings of love being the result of revolutionary or great moral action. Most of us live with the smaller sorts of quandaries: How to express our feelings of love when words do not suffice, or how do we make the right metaphor for the feelings we have.

I've been put on to Metaphors We Live By, by George Lakoff and Mark Johnson, and am in the thick of reading it. It is extremely helpful to me both as a writer and a printmaker. More on that later. But suffice to say, I am excited by the prospect of being able to look at all sorts of efforts to express, in a public way, feelings of love in ways that do not rely upon words alone, and more particularly words that have (supposedly) exact meanings.

Even here in Anglican Land this move to express by metaphor (verbal or otherwise) the affection and love we can and ought to have in "the bonds of affection" that is at the core of our Anglican Communion way of life.  If the Anglican Communion is, metaphorically speaking, a family of churches, then what does that say about how we treat one another? Do some of us believe that metaphor can be extended to include the notion of disowning a member of the family... no longer including that one in for family feasts and fasts?  If the AC is, metaphorically, a kinship group (all cousins once or twice removed from the same uber-mother church) then how do we members of 38 different churches understand being cousins?  Well... you see where this is going.

There is also beginning new energy in Anglican Land around working on a theology of marriage, due in large part here in The Episcopal Church, to a resolution of General Convention (A050)  supporting such a study. .  Elizabeth Kaeton has taken a first whack at some of the issues over on Telling Secrets. Go there and read.  A similar study is about to be undertaken in New Zealand

I've considerable reservations about the study, which is meant to be about marriage. In the first place, Elizabeth is right, the moment one uses the word "marriage" the conversation is likely to be about that historical thingy called marriage, which is mostly about men and women, snakes, property, and so forth. (As Zorba the Greek said, "the full catastrophe.")  What we might hope is that the study will be about that SOMETHING for which marriage metaphors give hints.

I have no notion what gay and lesbian friends "need." But I have to say I don't need more marriage images by anyone that carry forward the experienced metaphors of marriage between men and women.  A fifty percent failure rate on a pledge of life long engagement, a convoluted history of mostly patriarchal control, and a use of marriage and family as an instrument of social engineering, don't help a bit.

Hopefully (and again I speak as a non-user, being older than dirt and, as they say, "happily married,") this study will look at what it means for people to commit themselves to one another, perhaps metaphorically to tie themselves together on the raft of mutual love, in a world that has few places for us to go for love that lasts. Perhaps the study group will work at marriage in fact being like the love that Christ has for the Church (the metaphorical plus and minus on that one is immense).   Well, again, you've got the idea.

So, may the committee arising out of A050 do good. Good needs to be done.

Meanwhile, here in Lewes, on the edge of the bay and the big water, I have been working away at a small expression of the feeling of love, in the form of a lino cut. This one uses a technique of taking the block and cutting it into parts, like a jigsaw puzzle, and then inking each part and refitting it into a whole, and then printing. Here it is: 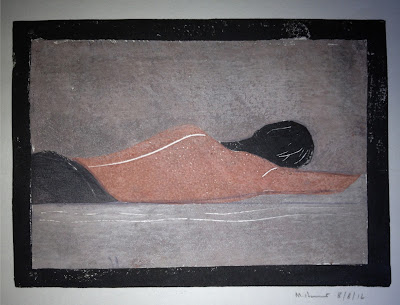 It's a night scene, and without words it is a statement of feelings of love. Whether or not it is any good is another matter, but it is an attempt to make marks on paper that express something about love.  It is not the brave act of expression that Dr. Semugoma made, it is not the wonderful "bubbling up" of Elizabeth's energy, and it is certainly not a revolutionary feeling of love. But it is, I think, a reminder that love is about body and closeness, and night sight, and simple acts of worship.

And perhaps this small lino cut is also part of the metaphorical harvest of expressions that make up what we mean by love.