The Anglican Church in North America struggles on

The Anglican Church in North America and its side bar faithful companion the American Anglican Council are out there struggling away to unite the real, true and faithful Anglicans in all North America and surrounding parts, make way a highway for God as they understand God, and provide a way for so called orthodox Christians to move beyond the sad divisions, etc, and into the new light of Anglicanism renewed.  Or something like that.

Of course the problem is, they are plagued (as are we all) by confused, obtuse, and sometimes not very bright companions.

The hoped for partnership with the Anglican Mission in the Americas fell apart as AMiA fragmented and lost its bearings.  ACNA's archbishop, Robert Duncan, spoke quite frankly about the difficulty in trying to work a way forward with AMiA on Anglican TV. You can listen to the video, if you must, HERE. 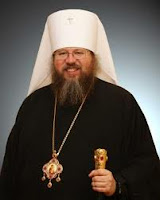 Then there was the much trumpeted conversation with the Orthodox Church in America, whose leader, Archbishop Jonah as forced to resign this year. He spoke at the ACNA  Assembly this year and at the inaugural assembly in 2009. His last speech can be read HERE. Apparently Archbishop Jonah was found to be an unsatisfactory leader on several counts.

Archbishop Jonah in his speech railed against the secularism that he believes is the dividing line in Christendom these days, but he began with these remarks (bold, my emphasis):

"Over the past three years our churches have conducted a theological dialogue, discussing the issues that separate us, issues that are not so much OCA vs. ACNA, but issues that separate Anglicanism from Orthodoxy. This has focused on the issue of the filioque, the addition by the Roman Church to the Nicene Creed, forced on the entire Western Church in the 11th century, and this, disrupting the unity of the confession of the Catholic Faith.

I would remind you that the root and foundation of the Church of England is not “Roman” but rather, the broader Orthodox Catholicism that prevailed until the Roman Church began massive changes in the Second Millennium. The English Church was a local Orthodox Catholic Church in communion with Rome and the rest of the Churches for most of the first millennium. Part of the English, and even continental, Reformation was intended to bring the Church back to its original roots, free from the changes that occurred during the isolation of the Western Church in the Dark Ages and Middle Ages. The Orthodox see the Reformation as having gone awry, and reinforced the very elements that made the Western Churches’ theological positions idiosyncratic, thus isolating it even more from Orthodoxy.

My hope is that we can roll this back. You have the opportunity to return your Church to its original heritage, and thus actualize the rich inheritance of English Orthodox Catholicism, in communion with its root tradition. This means the overcoming of generations of schism, a schism which was forced on the English Church, and then a perpetual state of schism for itself and the churches established by it in its colonies and missions. This needs to be healed.

The ecumenical hope is to overcome the schisms of the West, so that the English and Roman Churches can again take their place within the communion of the One Orthodox Catholic Church. You have an immense role and opportunity within this. Removing the filioque is not simply a nice gesture of ecumenical solidarity; it is, rather, an affirmation of the ancient faith of the Undivided Church.

Realignment. There is another element in this which is of immediate importance, and directly follows on the above. As was written about by Robert Terwilliger, a great Anglican divine of the 20th century, there is a coming realignment within Christianity, one which we can already see the strains of. Whenever schisms happen within the Church, they are generally because certain individuals lead a group out of the Church, being disobedient to the Faith and Doctrine, and refusing to submit to the authority of the hierarchy, which is trying to discipline them and call them to repentance."

Now on the matter of the Reformation having gone awry, and the Church of England and associates being in schism, "forced on the English Church and then a perpetual state of schism for itself and for the churches established by it in its colonies and missions" I suspect Duncan et. al. would have to swallow a lot to take that sort of understanding of unity on.  Archbishop Jonah is asking a lot from a crowd that includes members of the Reformed Episcopal Church and various evangelically minded folk.

But the ringer is the definition of schism posed by the Archbishop, "Whenever schisms happen within the Church, they are generally because certain individuals lead a group out of the Church, being disobedient to the Faith and Doctrine, and refusing to submit to the authority of the hierarchy, which is trying to discipline them and call them to repentance."  Now he goes on to note that the schism of today is different. It is a battle between people of faith and secularists.

Well, the Archbishop, a good friend of ACNA, turns out to be a not so good leader in his own camp. He has been turned out.

This leave ACNA with a less clear "Orthodox" party.

Meanwhile the catholic minded in ACNA - the Forward in Faith gang - are stuck with the problem that ACNA has not clearly stated its stance on the ordination of women. There are no women bishops, but there are women priests and deacons. Forward in Faith must deal with the reality that ACNA will continue to have women clergy - something they believe wrong and / or theologically impossible.  ACNA doesn't look as if it will move.  So there is instability there.

Over on the American Anglican Council pages the latest rant from P. Ashey concerns the terrible bugaboo of "post modern" thinking. His rant can be read HERE. Like the good former Archbishop of all things Orthodox in America on secularism, Canon Ashey is all worked up over the captivity of The Episcopal Church by post modernism. Aside from this being a heap o' dung (it not being true) it is also an extension of the usual blither that says that The Episcopal Church has abandoned the faith (a charge mounted by the deposed bishop of Pittsburgh).  Ashey writes (bold emphasis mine):

"I recently read an article by Dr. Michael Poon in The Living Church (August 26, 2012), "Look Beyond England."  Dr. Poon, director of the Centre for the Study of Christianity in Asia (Singapore), has been a frequent critic of "post-Western colonialism"—especially those quarrels and disputes "exported and internationalized" by British and American (read "Western") Anglicans upon "institutionally weak" Anglican churches particularly in the Global South. I was therefore astonished by his conclusion:

"For me, as those in the Oxford Movement once saw, the disestablished American Episcopal Church, holding out the vision of a catholic and missionary church, offers a more promising future of spiritual renewal for the Anglican world. The Episcopal Church, a spiritual forebear of Anglicans in Asia, will continue to occupy a central place in God's unfinished plans for Anglicans."

Surely Dr. Poon must know that The Episcopal Church of today bears little resemblance to the spiritual forebears of Anglicans in Asia—the missionaries and others who came believing in an Anglicanism rooted in the Bible, the Creeds and the Thirty Nine Articles.  Surely he knows that those Anglican forebears believed in the uniqueness and universality of Jesus Christ as Lord and Savior of all people—quite unlike the leadership of The Episcopal Church USA and other western , post-modern Anglicans.  Surely he must know that it is not the Bible but Post-Modernism that shapes the thinking and governance of post-Western colonial Anglicans in The Episcopal Church, The Anglican Church of Canada, the mother Church of England and elsewhere among Anglicans in the West. Post-Modernism is the current Western cultural ideology that has been shaping revisions to the Christian faith among Anglicans dominating the governing structures of the Anglican Communion—especially those from The Episcopal Church to whom he invites us to look for hope and a future!  How could he have missed the death spiral in average Sunday attendance, baptisms, and confirmations in the Episcopal Church simultaneous with its violations of Lambeth Resolution 1.10 (1998) in the consecration of partnered homosexuals as bishops, the provision of rites for same sex blessings, and now the access of transgendered persons to holy orders?

Canon Ashey is apparently of the opinion that his church, the Anglican Church in North America, is not a western church or that he and fellow travelers Anderson, Duncan et al are not themselves the product of this supposedly poisoned environment. What planet did he come from?

Ashey and Anderson are also out to recruit the last few candidates in The Episcopal Church for conversion to ACNA.  They need all the recruits they can get, for their friends on the "Orthodox,"  evangelical and catholic affinity groups are beginning to get antsy feet.  If some are walking away others must walk in.  What are they going to say?"Hi, I'm from a church that looks Western, speaks English, loves English church stuff, but isn't western."

It's time for ACNA to stop using its friendly American Anglican Council hounds as lead singers for its recruiting theme song. And it is time for them to stop maligning the faith of either our leaders or ourselves over here in Episcopal Church land. They have more immediate things to attend to at home.