“Memento Mori,” the matter of reflecting on death, takes visible form in objects – notes, poems, fictions, remembering stories, visions, and remnants of bodies (hair, fingernails, skulls, bones). Sometimes the remembering is a way of closing the distance between people separated by time and space. 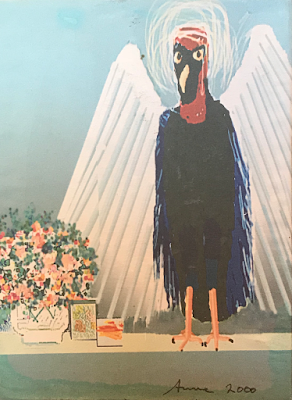 My Mother, the sainted Anne, reflected on death many times in her art. Here is her take on the Angel of Death. She always liked that weird bird. It sat on her bureau next to a small container that held some of Ed's ashes. 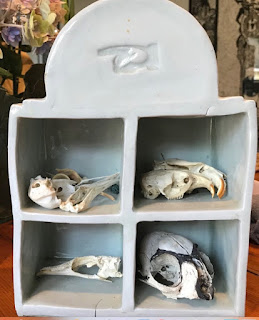 She also made a ceramic mausoleum for animal skulls. Note that she was theologically sensitive in an Anglican sort of way, to the issue of whether or not animals had eternal souls. The hand pointed sideways, suggesting that perhaps animal souls were destined to some other future than “up.”

This last week I found myself thinking of Anne’s running commentary on life and death, a conversation that occupied a good deal of her creative energies in the last quarter of her life, that is life after the death of her husband and always present companion, Ed.

The occasion for memento mori, and the accompanying thoughts about Anne’s thoughts on death, was the death of Marilyn, who for several years was central to my life. We were married for two years, separated for one.  That was over fifty three years ago. Marilyn had the good grace to know that she and I had no business being married and divorced me. She freed me for a future that was filled with blessing and wonder. I met Kathryn and from there came marriage again and family. So much grace has flowed forward from there.

While the process of ending with Marilyn was painful it did not require or grow from dislike. We were not required by the process to deny the love and affection that had existed between us.  So, for all these years I have carried her somewhere in my heart as part of my sense that love continues in its own way.

Eight days ago I got notice of Marilyn’s death from Arthur, husband of her twin sister Marie, and good friend over these years. I had not seen Marilyn for these past fifty-three years, but Arthur had occasionally provide updates about she was doing. He emailed me that she had been found dead in her home. Very few other details were available.

This week I was working on sketches for new woodblocks. As those progressed I realized I was doing a sketch of a death mask for Marilyn. The finished block is not in any way a realistic mask of Marilyn. After all, I have not seen her except in memory for a very long time, nor have I seen any photos of her. 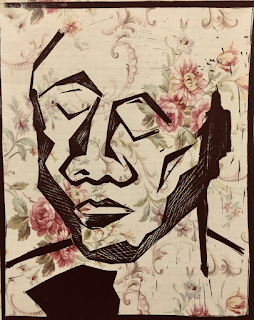 Still, what is left in memory has made it into the block. Here it is:

I printed it in two versions, one on patterned paper, one on white. Here is the patterned one.

How do we remember? And how will we be remembered by those who loved us, or who we loved? After all the bumbling about in life, will closing memories somehow honor the best we were to one another, and not simply the bumbling worse? I hope so.

Anne, the sainted mother, had a strong sense that death was a not unwelcome visitor, but like the vulture/ angel of death, a bit frazzled and quizzical, waiting for things to catch up with the Presence and the present. And she was willing to collect remaining bones and place them in a small mansion, to remind us too of our mansion to come, where we are assured that we have reservations.

I trust Marilyn has a room with a view.