I guess there's just a meanness in this world: A reflection. 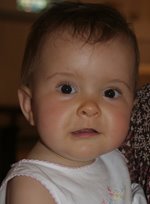 It’s been a week since the end of General Convention. I returned home to Lewes, the village by the bay, by the big water, to baptize our granddaughter. The picture is of her, with her hair still wet from the baptism. We spent some time with extended family, and we are looking forward to going to an art opening of work by our daughter Emanuela. You can see a video about her and her work HERE. It has been a blessed week.

As a member of the Joint Committee for the Nomination of the Presiding Bishop I was very pleased that two of the four candidates we put forward were the final focal points of voting, and personally I am overjoyed that Katharine Jefferts Schori was elected. My joy was further confirmed in her sermon last Wednesday morning and her interview on NPR today. She is solid.

But about the Convention itself, in its workings, decision making and unfolding, I have much more mixed feelings and concerns.

Perhaps the place to begin is with this: Jesus said, “Let what you say be simply 'Yes' or 'No'; anything more than this comes from evil.” Matt 5:37, RSV

One would suppose that this precisely is what decision making in a democratic assembly of Christians ought to be about. At the front end of the struggle there would be arguments, justifications, pleas, negotiations, compromises, promises, times out for prayer or quiet time, and on and on. And at some point members of the body would state their ‘yes’ and ‘no’ to some final form of a proposition set before them.

And, just so everyone would understand the implications of it all, it would be repeated again and again that if you don’t like the results, stick around long enough and you can vote the resolution down again or wait out the term of incumbents. There is always, for the ecclesial politician, “next year in Jerusalem.” No ‘yes’ or ‘no’ is forever, it just seems like that sometimes.

“Everything else comes from evil.”

In our day perhaps evil is not the right word. Perhaps these days ‘meanness’ conveys just enough of maladroit efforts by anti-democratic politicking in the both civil and religious life to convey Jesus’ disgust with the fancy, snake-in-the-grass, sleaze that passes for political savvy and ecclesial power brokering.

Such meanness, for example, includes proclaiming, after the fact of a disastrously flawed debate, that a particular resolution of the Lambeth Conference of 1998, has the force of moral law for all churches in the Anglican Communion, when the fact is NO resolution of Lambeth, well debated or not, is binding, no matter what its force.

More succinctly and most recently, it may be that meanness came to visit the General Convention under several guises.

First, there was the possibility of the spoiler vote:

Several observers have suggested that some votes in the election and confirmation of the Presiding Bishop were cast so that a known progressive was more likely to win, thus proving just how miserable the Episcopal Church has become. While there are some indications that this might have actually occurred, there is all sorts of evidence that the realignment crowd had already decided they couldn’t actually carry the General Convention to the right.

Then there is the matter of distancing:

B033 passed in the House of Bishops last Wednesday, but by what margin we don’t know. The vote in the House of Bishops was followed within several hours by several groups of bishops disagreeing, the Network bishops “disassociating” from the vote and progressives “dissenting.” We do not know the actual vote on the matter, since no roll call vote was taken. But when it was over, perhaps 13% of the bishops in attendance (according to Bishop Wimberly) found themselves protesting or walking out.

What becomes mean spirited is the matter of “disassociating” and leaving. In a religious community part of the democratic process in the church is called sticking around. The Windsor Report calls it by a more fancy name: autonomy in communion. We get to be part of the process provided we don’t walk off because it doesn’t go our way. Where the Windsor Report gets it wrong is insisting that autonomy is limited by some prior state of affairs, namely communion and identifying communion with the Anglican Communion. The democratic process must begin with the assumption of autonomy and along with it a social contract by which we can get our turn later to throw the rascals out. That is why this business of an Anglican Covenant is actually of some importance. The name "covenant" is already in use, thank you very much, but "compact" or "constitution" or some such might do nicely.

One of the real matters of contention in regard to the Windsor Report and its approach had to do with the phrase, “until some new consensus in the Anglican Communion emerges.” (WR par 134) The problem with the “until” is that gave non-democratic force to decisions made now. Autonomy in the quasi democratic context of our governance means that NO decision holds in force “until” and unspecified time. Every decision is provisional, in place until at the most two General Conventions have said otherwise (in the case of Constitutional changes) and one for all other decisions.

But no matter, two hours seems unbearable for some, and three years an eternity. One reporter suggested that immediately on the call for a vote, several of the realignment bishops left. What disassociation does is short circuit the democratic process every bit as much as the effort to spoil ballots by voting otherwise than the “yes” and “no” of conscience, best hope or theological certainty dictates. The disassociation crowd left. Their “yes” or “no” was not enough. They walked, even if quietly.

There were a group of dissenter bishops who it appears made their statement and stayed. Dissent can happen in the room. Disassociation involves walking away. Dissent is about a particular issue, case or proposition. Disassociation is “we have no need of you.”

Disassociating is a meanness, the meanness of the embarrassed or the loser. But the greatest of these acts of meanness is the meanness of the ones who hoped for the worse in order to prove that they are the best. Disassociation, as practiced by dissemblers, is merely a way to further a cause that can’t carry its own weight in a democratic fashion.

There is almost no question that the realignment folk, Bishops, clergy and laypersons, were opposed to all the candidates for Presiding Bishop placed in nomination by the Joint Nominating Committee and against anything in response to the Windsor Report that was not absolute “submission” to what they understood the Windsor Report to require. But the realignment community has done very little gnashing of teeth, for they were already convinced that General Convention was going to do them no good. That being the case, helping drive the nails in the coffin was not a bad idea.

I am reminded of the last lines of Nebraska, a song by Bruce Springsteen:

“They wanted to know why I did what I did
Well sir I guess there's just a meanness in this world.”

There was a lot of good done at General Convention. The meanness distracts from the possibility that the Spirit of God may indeed work through the lumpy strange thing called the General Convention. But the signs are there: We have a new Presiding Bishop elect, and she is strong and clear. We are ready to get on with mission, with the challenge of the Millennium Development Goals, with energetic leadership in both Houses, with a wide range of programs and concerns, a sound basis in worship and prayer, and a faith grounded in the one covenant we sign on for when baptized, a covenant that our miss Lily took on by way of the community that will support her by sticking it out with her.

Maybe our granddaughter Lily will find the Church a thing of promise when she grows up. Maybe our daughter Emanuela will one day have her extraordinary paintings and drawings projected in a future Eucharist at the General Convention.

Maybe meanness will give way.

We live in Hope.