Venables of the Southern Cone.

The Most Rev. Gregory James Venables is a relatively quiet member of the Global South community, although consistantly there and emerging as a powerful voice and the point person for the Global South Steering Committe. The Bishop of Bolivia, Frank Lyons, has been much more in the news. But this last weekend Bishop Venables sent a tape to the Diocesan Convention in San Joaquin which was, I gather, played at the Convention Eucharist. It is a very interesting piece. I have commented on one section of it earlier and the transcript of the full sermon is now on the Global South web page. It is accompanied by this note:

"We are posting a transcript of Archbishop Greg Venables’ speech to the Diocese of San Joaquin . The video is already released to the public earlier this week. It was a sermon for the Eucharist Convention in San Joaquin, done by video because Abp Greg was not able to attend the service. He was not asked about its release to the public. Do hear his pastoral message in it’s context. "

The plea "do here his pastoral message in its context," is to suggest that the mild storm that followed the posting of the video is perhaps unwarranted. Actually, I think it is every bit as telling as the stormbrewers suggest.

A few items of some interest regarding Bishop Venables and the Province of the Southern Cone:

In the first place, while the GS website and Anglican TV title him “Archbishop,” his official title seems to be Presiding Bishop of the Southern Cone and Bishop of Argentina. So, just as with the Episcopal Church’s Primate, he is best addressed, one would suppose as “Bishop” directly and as “Presiding Bishop” by title, but not as Archbishop.

He comes across as a caring, warm and very supportive. I would guess his talk was warmly received in San Joaquin. As part of a wider effort to help diocesan deputies see themselves clear to vote for the constitutional changes in the Diocesan Constitution it would appear his words of comfort were effective. I believe they also were misleading and promise something that will not come to pass. 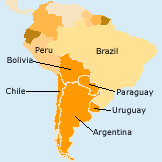 The churches in this Province began mostly with chaplaincies for English speaking foreigners. Only in recent years has the work spread more widely. There are wide variations in success. Most of the mission work has been by way of the South American Missionary Society, UK and US, although the Episcopal Church has had a number of missionaries there over the years.

Chile and Argentina are fairly robust dioceses. Peru and Uruguay, both having had the leadership of Bishop William Godfrey, are growing well and carefully. Bolivia, with Bishop Frank Lyons, is very small – four churches. I have no information on the church in Paraguay. According to THIS site, “The diocese of N. Argentina, composed of the provinces of Salta, Jujuy, Tucuman, Formosa and parts of Chaco (see below), is home to over 150 Anglican parishes, most of which are in struggling indigenous areas.”

How many Anglicans are there in the Province of the Southern Cone? There doesn’t seem to be a very good answer. In 2000, the Anglican Communion office listed 22,000 members. Just who is included in that is hard to tell.

The Diocese of Chile rightly states, “Es muy difícil encontrar un criterio universalmente aceptado para cuantificarla (¿miembros activos, miembros bautizados, asistentes a los cultos dominicales, simpatizantes... ?), pero es seguro que varios miles de personas participan en cultos anglicanos cada domingo en todo el país.” So, it is sure that there are “some thousands” who worship every Sunday. Whatever the number, the Church in Chile grew large enough to give rise to a split. There is also now an “Episcopal Missionary Church of Chile.”

I would hazzard a guess that there are now about 40,000 members of the Province of the Southern Cone. That may be generous, it may be stingy.

A brief look at the web sites for those dioceses that have them gives an exciting picture of evangelism and social action at work. There is much to be thankful for in what is happening in the Province. It is work that is growing. But it is also very tenuously present in many places.

When we look at the picture as a whole we see just how “thin” on the ground the Anglican presence is. The Southern Cone, about 55% the size of the Episcopal Church's territorial reach has about 4% of its membership. Knowing that the Episcopal Church is a small church in the US, we get some indication of just how difficult the tasks facing these small dioceses in the Southern Cone really is.

By comparison, the Diocese of Haiti, a very small area (27,750 SQ KM) , has something on the order of 120,000 members. The Province of the Souther Cone is 190 times the size of Haiti and has one third its members.

The Province and the Episcopal Church:

The Province is in a state of ‘impaired’ communion with the Episcopal Church. The ENS report on this begins, “The Anglican Province of the Southern Cone, during its November 6-11 Provincial Meeting in Buenos Aires, Argentina, unanimously renewed the position that it remains in impaired communion with the Episcopal Church and supported "our Primate and other Primates who are overseeing the development of a new ecclesial structure in the United States.”

There has been, as yet, no mutuality in this declaration of impairment. The Episcopal Church has not returned the favor. If the Primate, Presiding Bishop Venables, condones the continued alignment of US parishes with dioceses in the Southern Cone, does not speak out against Bishop Lyons and his taking part in ordinations here, and continues in support of the possibility of taking the diocese of San Joaquin ‘in’ as part of the Province, it may be necessary to state more clearly the opposition of the Episcopal Church to the actions of the Province.

When Presiding Bishop Venables speaks, he speaks for a very small church in a very large and complex environment. He and the work of mission there need our prayers and support. He has every right to speak the truth as he understands it and what he says needs to be judged on its merits. But we do not need to feel that he is speaking for the Communion, or even for the so called 70% that are in the Global South.

He is, as are we all, representative of a minority church in a plural church world. I cannot help feeling that we need one another. I only wish he was able to say the same.

Email ThisBlogThis!Share to TwitterShare to FacebookShare to Pinterest
Labels: intruders