A Silent Vigil until the end of the War, and the Church squanders its passions.

Lewes, Delaware, a small town on the edge of the Ocean, edge of the Delaware Bay, made the New York times today, Memorial Day. "Silence Speaks Volumes at Intersection of Views on Iraq," by Ian Urbina tried to give a flavor of the Lewes Silent Vigil, the opposition to it and the protest that sprang from it. For what it is worth, In the story I am the "peace protester (who) broke the silence Sunday afternoon to read the names of soldiers killed in the past week."

The story, of course, is never complete, for with all the sameness of the week to week Vigil, each week is different. Yesterday, Sunday of Memorial Day Weekend, was good - about 55 of us. It was bad - the number of American war dead the previous week was very high. It got a little ugly - I read the names of those who had died that week and while doing so a second person across the street yelled, "Hey Stupid, Shut up! Don't you know you are supposed to be silent?" Nice of him to notice that we had changed our presence just a bit. We are now reading the names of those killed during the preceding week. But the shout from across the way wasn't enough. Towards the end of the 45 minute vigil the police were called, and an officer came and told our vigil leader that we had to stop reading the names.

Well, not likely! It is difficult reading the names, but it is a growing necessity. The Silent Vigil is fourty-five minutes of contemplative peacemaking. At its core is remembering the human costs of war. Naming names, like remembering the numbers of those killed and wounded and the civilians killed (even the very conservative number we list), is the touchstone for our remembrance and contemplation. We will do what we need to do to keep in touch with those realities. 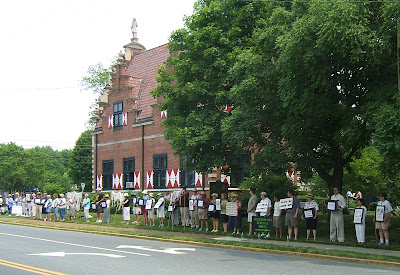 Lewes Silent Vigil, Sunday, May 28, 2007
Meanwhile, Andrew Brown, writer for the Guardian, has written a piece, "The Art of Departing" which is a profound prediction of yet another cost of this war - in which the British will bear the cost of the departing from Iraq. He says, "Although the catastrophe in Iraq suggests that the Americans have learnt nothing from Vietnam, a careful study of the map shows they have come up with an answer to Kerry's question: the last man to die for their mistake in Iraq will almost certainly by British." If there were reasons to wonder why the US is sometimes hated even by its friends, this would be an answer.

And, as usual Archbishop Desmond Tutu puts the Church on notice: "Anglicans Obsessed by 'Gay Issue.'" published on the BBC web site puts Anglicans to task for focusing on the 'gay issue' to the exclusion of pressing issues of justice and peace, both in Africa and around the world.

So here we are: The War goes on and the Church is to often obsessed with its own perceptions of what is important.

Time spend in silence, with even a few words now and then, naming the dead, is in its own way an effort to shift the focus to the human cost of the war which will include the lives of more young people , huge numbers of dead and wounded in Iraq, displacement of funds and energy that might otherwise find good use, and what friends we have left in the world, even close old friends from whom we got the word "Anglican."