Archbishop Gomez and his not too bright idea: "church within church." 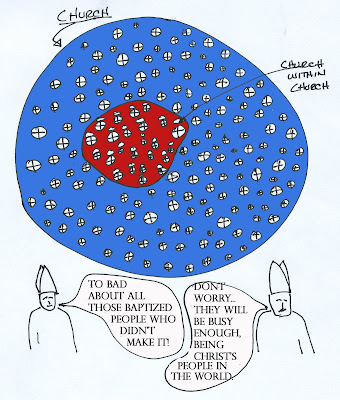 Here is an interesting tidbit from the Global South webpage concerning Archbishop Gomez and his idea about what an Anglican Covenant is good for:


“A ‘church within a church’ is the plan for the Covenant” Archbishop Gomez said, allowing those who hold to the Anglican ideal to remain united. “We have no curia, we have no central administration,” he noted. There “must be a way of holding each other accountable” he concluded, for “without the Covenant Anglicans will drift” apart.”

It would appear that he doesn't deny that the larger body of folk related to either the Anglican or wider Christian body of belivers is the church. Rather the Anglican Covenant
is about "a church within a church." It is, in other words, a rehash of the notion that "the real" church consists of those who are baptized and somehow really, really, really holy.

There are about a hundred things wrong with the notion of "a church within a church," not the least of which is that such a gathering of people will identified not as "in the world but not of it," but rather as "in the church but not of it."