Time to go Archbishop Gomez: leave with your honor intact. 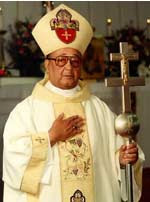 (Please note that the Anglican Centrist said much the same thing, only better and earlier than this but I did not see it until after writing myself. Go HERE for that posting.)

Archbishop Drexel Gomez was ordained in 1959, became bishop in 1972, has been Archbishop of the Province of the West Indies since 1998. Sometime this year he will be 70 years old. His successor has been elected. Bishop Laish Boyd became bishop coadjutor for the Bahamas in 2006. Assuming the Province continues in the practice of electing a Primate who continues as diocesan, on Archbishop Gomez’ retirement as Bishop of the Bahamas there would have to be an election of a new Primate. I assume he will want to hold on through Lambeth or whatever else he might attend in 2008 and then be off.

The time to leave is now. Archbishop Gomez has been a primary player in the current Anglican mess for the past 10 years. Now, in the run up to Lambeth 2008 it is reported that he has considerable doubts that the Anglican Communion is able to work through its problems. Having those doubts is not the problem, contributing to the mess is.

At the ordinations of Bishops Atwood and Murdoch in Kenya Thursday August 30 the Archbishop was preacher. One assumes he preached from a supportive position. I presume he took part in the laying on of hands. His participation in these ordinations makes it clear that he has moved on from any thought that the current Province called The Episcopal Church will continue as part of the Communion. These bishops will join with the Common Cause Partnership in September and will be working out plans for an emerging entity that will claim to be the “real” Anglican province in North America. Who knows if they can pull it off, but if they do they will be looking for a covenant that TEC could not possibly sign precisely so that they will be seen to replace the no longer orthodox province of The Episcopal Church.

That being the case, he should resign as chair of the Covenant Design Group (CDG) or should be asked to go. That group is responsible for the difficult but important work of developing a covenant or charter for life together in the Anglican Communion, one which would challenge the church to mission and define with greater clarity what is required of member churches concerning mutuality and interdependence.

How can the Archbishop, in good conscience, return to the tasks of the Covenant Design Group having made it increasingly impossible for that work to proceed, even for the next year?

The question for the Archbishop is this: Have you no sense of honor? If you do, it is time to keep it intact.