Bishop Duncan is elsewhere once again

The Moderator of the Network of Anglican Communion Dioceses and Parishes, aka the Anglican Communion Network (notice how the second sounds more "official" than the first?) appears to have been in England for a meeting of the Global Anglican Future Conference (GAFCON) planning group while the House of Bishops was meeting. On the Church of Nigeria website there is the announcement of the meeting in England from March 10-12. 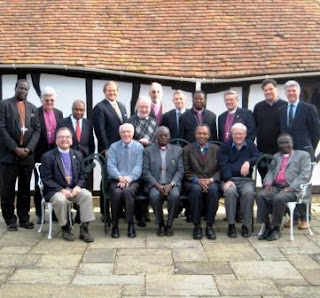 Here is photo of that group - Bishop Duncan is seated on the left.

Once again Bishop Duncan is missing in action, and action there was at the House of Bishops retreat and meeting. Among other things the Bishops worked on ways to be present at Lambeth, deal with the work of reconciliation, heard that Bishop Robinson will not be invited in any meaningful way to Lambeth, accepted various changes in episcopal appointments and retirements, and finally on the 12th, deposed Bishops Schofield and Cox.


Bishop Robinson said in his statement to the House, "My own pain was sufficient enough that for 36 hours I felt the compelling urge to run, to flee. My inspiration for staying came from my conservative brothers in this house. I have seen John Howe and Ed Salmon and others show up for years when there was a lot of pain for them. I see Bill Love and Mark Lawrence, and I know it is a very difficult thing for them to be here right now. For me, the worst sin is leaving the table. And that is what I was on the verge of doing. But, largely because of you, I stayed. Thank you for that." Conservative bishops who were present in times of pain and difficulty became for Bishop Robinson a source of comfort in the moment when all hope was dashed of being invited to Lambeth in a meaningful way. Bishop Duncan was not to be numbered among those witness was helpful to Bishop Robinson.

The Moderator's absence from this meeting, and in particular the lack of his actual vote on the floor against the deposition of his friends Bishops Schofield and Cox, suggests that he prefers the witness of involvement with the GAFCON, which has the promise of its leadership (to be taken with a grain of salt) to be a fine and positive meeting, to the witness of standing with his friends in the local dock which promised only a painful interlude in the life of the Church.

Pain is not after all an unheard of problem in the House of Bishops. Various bishops at various times have had their share of pain. Bishop Robinson said so in his remarks to the house: "I want to acknowledge that I am not the first or last person to be in pain at a House of Bishops meeting." Pain is not of course a measure of true witness. Pain in the church is just a fact, an unsolvable fact. I know of no church leader who has not been in one way or another wounded in the strange ways the church grinds down those it sets apart for leadership. But the witness made is not measured by the pain suffered or inflicted. The witness made is measured by standing with and by those who at one time or another are or feel they are cast aside for the greater good, perceived of course by the community itself.

It also seems apparent now that the Network is now an ajunct to the Common Cause Partnership (CCP) - its future has been taken by the leadership into the new world of the CCP.

The Network recently posted its own statement of "Why the Network Matters?" Here is their answer:

Common Cause is clearly our future. As we work with many others to speed its success, we continue to provide nuts and bolts support services, like a pension plan and property and liability insurance to parishes and others who need them.

We regularly visit with parishes and dioceses around the country, providing support, guidance and visible connection between Anglicans. Through our Chancellor, Mr. Wicks Stephens, we provide advice to those forced to make decisions with legal consequences.

Our Ministry Development Program has shepherded 20 men and women to ordination since we took over its work two years ago. A further 22 are currently discerning a call.

In the midst of all of this, the Network has incubated a thriving suite of ministry initiatives like the Anglican Relief and Development Fund, The Titus Institute for Church Planting, Anglican Global Mission Partners, Young Anglicans, and regional evangelism conferences. As these ministries mature, we have been able to offer them to the whole movement.

There is no question that there is more to do in the days ahead. God is building a biblical, missionary and united Anglicanism in North America. We at the Network are proud to contribute to that great work, especially as the administrative support for the Common Cause Partnership."

The Network then is the administrative support for the Common Cause Partnership (CCP) and its programs serve that group. It serves the Moderator of the CCP. Of course Network dioceses and parishes are recipients of its services, but those dioceses could also chose (and do) to make use of Episcopal Church programs... particularly as relates to pensions.

The Moderator of the CCP is more and more the leader of a new ecclesial expression, one unrelated to the Episcopal Church in any way.

It is perfectly within Bishop Duncan's right to decide which agenda is more important to him - the House of Bishops or the GAFCON leadership meeting. That's his business. But he should not be surprised if his absence continued unwillingness to witness, pain or no, in that context, are noted.