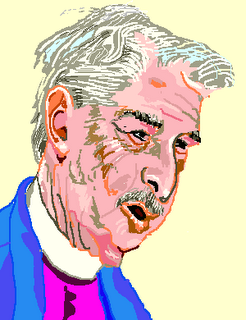 Bishop Iker’s 10 Reasons to “Realign” have been published. The Pluralist has spoken on Bishop Iker's comments HERE. (The Pluralist produced this picture to the left.)

1. This is God’s time – our kairos moment – and it has been coming for a long time…
Glad to see that Bishop Iker has a handle on God’s time. But wait…how do we know? The Bishop may be (and I think is) wrong. Great identification with God's time and "our" time. Just a tad arrogant, don't you think?

2. Actions of the General Convention have brought crisis and division to the whole Anglican Communion, not just TEC. … We need to dissociate ourselves from the bishops and dioceses that are violating the teaching of Scripture...

Dissociation is not the same as leaving. Still, it can be. If one feels that way, one might leave. Point taken.

3. The heresies and heterodoxy once proclaimed by just a few renegade bishops – like James Pike and John Spong – are now echoed by the Presiding Bishop… The greatest problem we face with Katharine Jefferts Schori is not that she is a woman, but that she is not an orthodox bishop.

Well, Bishop Iker, you protest too much. The greatest problem for you, given your years of witness, is that she is a woman.
As to the Presiding Bishop being orthodox, explain to me how your position, having been ordained in this church under the so called new prayer book and with the Constitution and Canons in place, is not as heterodox as you claim she is, or alternately that she is not as orthodox as you are. The Pluralist speaks to this.

4. If we do not act now, we will lose our momentum and lose our God-given opportunity. …We will never be stronger than we are right now! We will never have another chance to act with such a strong majority. …

Right. Act now, because matters are slipping out of your hands. This tactic is very much like starting a war now on the grounds that you will never again have as much support as you do now. Reminds me of, well, never mind….
5. TEC is not turning back and matters will only get worse. … By the time I retire (in the next 7 to 13 years), this diocese will be unable to elect an orthodox bishop to succeed me.

This is really, really, really, a bad reason. Do it now or else you won’t be able to elect an orthodox bishop, meaning one that will not ordain women. What a mess of pottage.

So we better run?

7. At this time there is nothing in the Constitution or Canons of TEC that prevents a Diocese from leaving. … So we have this window of opportunity to do what we need to do, for you can be sure that the next General Convention will close off this option by adopting amendments that will make it even more difficult to separate in the future.

There is nothing that prevents people from leaving. The organization of a diocese (no the people, but the church entity) is a matter for the Church to deal with. If you leave you can go where you are received, be a diocese through them, do what you want. But you can’t be the Episcopal Diocese of Fort Worth. What you want to do, and the only reason for leaving quickly, is to get out with the property before anyone can figure out how to make it the property of whatever the Episcopal Church entity is.
And BTW, the Constitution and Canons seem to point to the possibility of a mutual separation, and makes no provision otherwise. Have you ever asked General Convention for a joint decision to leave? I thought not.

8. The vast majority of our younger clergy, those ordained in the last 10 years or so, are in favor of the decision to separate and realign…

And who ordained them? I remember. You.

9. We have international support for making the move at this time. …We will then aggressively pursue the formation of an orthodox Province in North America in conjunction with the Common Cause Partnership.

Ah…now it comes: The reason to realign is that there is a place to go and things to do. With realignment comes the possibility of being part of the “true” Anglican Church in North America. Good point. Go where you want to go, be what you want to be. But the gamble is real and the stakes are high. If you are wrong you will be another splinter group claiming to be the true church. Go.
10. Most importantly, this decision is about the truth of the Gospel and upholding the authority of the Holy Scriptures. We believe in God’s full self-revelation in Jesus Christ, not in the speculation of humanist unitarians who have been elected to high offices in our church. Many leaders of TEC are teaching a false Gospel and leading people astray. Now is the time for us to take a bold, public stand for the biblical faith and practice of the one, holy, catholic and apostolic church.

I couldn’t help leaving this one complete. It is audacious, libelous and just plain arrogant.
Bishop Iker has ten reasons for realignment. But really he has one reason to leave the Episcopal Church and he wants everyone else to buy in: He hates the Episcopal Church.
Fine. Go. And those who are convinced that he is right, go with him. Leave the keys. There are others who still love this Church.
On his way out I bet he will not think to ask if being ordained bishop in this speculative humanist Unitarian false Gospel means he himself is so tainted that he is not actually a bishop at all. But if so he would be a false shepherd.
I think the Episcopal Church did something wrong. It affirmed and ordained as bishop someone whose hatred for the Church knows no bounds.
Bishop Iker has left, only his shadow remains. Time to turn on the lights.
Posted by Mark Harris at 10/01/2008 06:42:00 AM