Rumors of Dates for GAFCON Province of North America, etc. 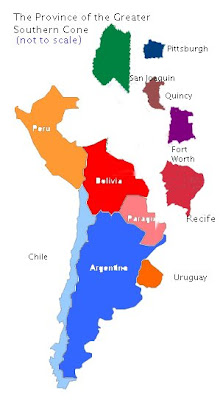 Right now the four groups that have left The Episcopal Church in San Joaquin, Pittsburgh, Quincy and Fort Worth and have formed as Dioceses in the Province of the Southern Cone and are appendages to the Province of the Southern Cone. In addition a deposed bishop and some clergy and people from the Diocese of Recife in Brazil have done the same. Any two of these groups has more members than all of the Province of the Southern Cone put together. At least in the case of the 4 from TEC It is only temporary, for which the PSC ought to give thanks. They claim they are only part of the PSC until a new improved GAFCON Province of North America NIGPNA can be formed.
Of course this may not be all that good as good news. When they form NIGPNA they will cease to be part of the Anglican Communion, having lost their already tenuous connection through membership in PSC. But it appears they don't really care. GAFCON is the wave they are catching, not the Anglican Communion.
The PSC expanded involves the dioceses already in the Southern Cone plus the 5 formed by people having left TEC or Brazil. 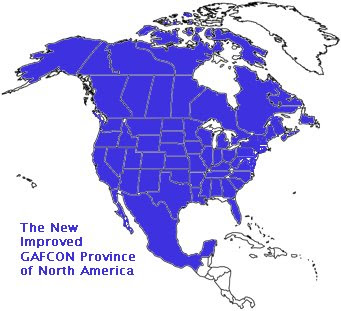 Meanwhile rumors abound that sometime near the beginning of December - say the 3rd or the 6th - the NIGPNA will be formed. No doubt Moderator Duncan will be the primate-like persons for this GAFCON invention. NIGPNA will, one assumes, cover all of North America where TEC or the Anglican Church of Canada (ACoC) is or has been the jurisdiction. Mexico gets included because it is part of North America and also was at one time part of TEC, noting of course that it started on its own and now is a separate Province. La Iglesia Anglicana de Mexico is not particularly happy with GAFCON. I do not include non domestic territory of TEC in this map because it is hard to get all the figures for those dioceses into the mix.
The NIGPNA is really about the US and Canada. The whole population of Canada and the US is roughly 337,000,000 persons. So taking that population and the figures given by the Moderator as to ASA (100,000), and giving them the benefit of the doubt and allowing that 1/2 of their membership is in church on a given Sunday, that means the church population of the Common Cause Partners is about 200,000, or about .06% of an overall Canada / US population of 370,390,000. The percentage for the combination of the ACoC and TEC is about 2,740,000, or about .8%. The numbers turn out to be about what we have expected from other ways of working the numbers. NIGPNA will represent about 7% of the whole of ACoC/ TEC membership.
A commentator has asked why there is such interest in this really very small grouping of Anglican and Anglican like groups called the Common Cause Partnership.
No matter the fine words from CCP and most recently Quincy and Fort Worth about compassion and brotherly love for those who have not joined them: The object of the exercise is to form a new Anglican entity in North America that stands over against the ACoC and TEC which are viewed by the groups making up this new "Province" as heretical and apostate. This new entity, called by them a Province, will not be in communion with TEC or ACoC. At least some parts of this new entity will believe that the women in ordained ministry in TEC or ACoC are simply lay ministers in clergy dress. Most will believe that TEC and ACoC are wrong about the way these churches deal with the issue of marriage after divorce, abortion, and certainly the possible full inclusion of gay and lesbian persons in the life of the church (remembering that neither church has completely made its peace with the issues here.)
In other words, this blue colored map of North America proclaims the emergence of a so-called "orthodox" community that makes the claim that it is Anglican and we (TEC and ACoC) are not.
They may be small in number, but in their pretense to be the carriers of the true faith which they believe has been abandoned by TEC and ACoC, they will speak so as to convince many to abandon TEC and ACoC for their solution. Fair enough! But we must pay attention because it is now time to be clear about what TEC and ACoC hold as central to our faith and witness, and what makes us believe that we are carriers of the Gospel of Jesus Christ. (More on this later.)
Our primary tasks must rest with the case for The Episcopal Church as a community true to the Gospel. Mostly we need not to obsess or worry about this new GAFCON Province. It will succeed or not as God wills. We ought to be about God' work as we know that work to call us. Our only attention to this GAFCON business ought to be to deny them the option of usurpation.
Over on Confessions of a Carioca, Dan Martin believes that is going on with GAFCON / CCP is either revolution or rebellion. There is another possibility: what is going on is usurpation. Perhaps we are dealing with a takeover which is not guided by great ideals of turning things around or protest, but by the desire to power. This is not to deny the real concerns for being true to belief that drives many in the realignment community. It is to say that forming this Province like entity is about more than community, it is about the power to claim authority in the place of the defunct authority of the existing churches.
The new improved GAFCON Province of North America purports to be closer to the true Anglican ideals and corrective of the awful TEC and ACoC. But come the first week in December I believe we will be dealing at last with the great effort to change the nature of leadership in the Communion. This is the hard right of the Global South flexing its muscle, testing its strength. The rest of the Communion in the Global South and elsewhere will have to decide if the flexing is to be challenged.
Of course, given that all the churches (Provinces) of the Anglican Communion are autonomous, it hardly nees to be said that all such power is assumed and an illusion. TEC and ACoC will go about being who we are quite independently of the NIGPNA or any other church with which we are not in communion.
Posted by Mark Harris at 11/16/2008 07:09:00 AM