Mensch of the day: Bill Rankin

Bill Rankin, known to many of us in Anglican Land as Dr. William Rankin, former Dean of EDS,  has just been named one of the 2008 Purpose Prize Fellows for his AIDS work in Africa. The write up of the award is HERE. The local paper knows him mostly as a retired priest in a local parish. That is as it should be and the pride in a local citizen who has done good things is theirs to cherish.
But there is more to Bill Rankin's story. 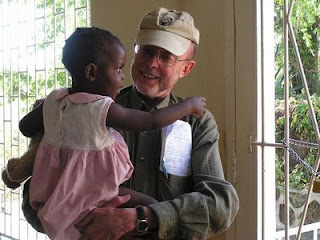 William W. Rankin is President of the Global AIDS Interfaith Alliance (GAIA), a non-profit non-governmental organization that partners with religious organizations in resource-poor countries for community-based HIV prevention and care.
From 1998-2000 he was Vice President, the United Religions Initiative, a global organization for reducing violence and creating venues for local inter-faith cooperation around the world. From 1993 to 1998 Rankin was President, Dean, and Charles B. Wilson Professor of Christian Ethics at Episcopal Divinity School in Cambridge, Massachusetts.
William Rankin holds the Doctor of Philosophy degree from Duke University, with a concentration in ethics. His Masters degrees are from Episcopal Divinity School and Duke University's Sanford Institute of Policy Sciences and Public Affairs. He has been a Rockefeller Foundation Fellow in the Humanities and was awarded an Andrew Mellon Post-doctoral Fellowship. He is a Fellow of the Cathedral College of the Washington National Cathedral, and has been a Visiting Scholar at Cambridge University, England.
A priest in the Episcopal Church, he has been a chaplain at the California Institute of Technology, and has served on hospital ethics, and research and human experimentation committees in Pasadena, Glendale, Greenbrae, and San Francisco, CA. He founded the Foothill Free Clinic in Pasadena, CA, was a founding trustee of the International Bio-ethics Institute, and was board chair of the Ecumenical Chaplaincy at San Francisco General Hospital. He has lectured on ethics and health care at Duke University, Fuller Theological Seminary, Mount Zion Hospital (San Francisco,) and the School of Nursing, University of California, San Francisco, where he holds a Clinical Professorship. He has been a trustee of the Child Health Foundation in Pasadena, CA, and President of Hospice of Pasadena.
Dr. Rankin was board chair of the Episcopal Church Publishing Company and of the Episcopal Church's national Standing Commission on Peace. A former member of the Harvard University Seminar for New Presidents and of the Council of the Cathedral College of the Washington National Cathedral, he has twice served as chair of the Boston Theological Institute, a consortium of nine Boston-area seminaries and divinity schools, and was an Overseer of the Wellesley College Centers for Women. In the spring, 2004, he was a scholar in residence at the Rockefeller Foundation Study and Conference Center at Bellagio, Italy
Dr. Rankin is presently a member of the board of the San Francisco Holocaust Memorial and Education Fund. He is a member of the HIV and AIDS Technical Expert Group of the Global Health Opportunities Update, published by the Global Health Council, Washington, D.C.
He has authored three books, over forty articles in refereed journals, and several book chapters. His published work in health care has appeared in Ethics in Science and Medicine, Asian Forum, Linacre Quarterly, The Public Library of Science Medicine, Healthspan, British Medical Journal, Global AIDSLink, The Singapore Nurse Journal, the U.S. State Department's Global Issues, The Public Library of Science (Medicine) and The Journal of Pediatric Nursing. He was a guest editor of the January 2002 British Medical Journal special issue on global HIV/AIDS.
What the bio doesn't say is that (i) Bill is a wonderful guy with a great smile and a heart bigger than any of us deserve, and (ii) I have his signature on my D.Min from EDS, thereby making it a double pleasure to have.
Bill Rankin is mensch of the day, in a time we all need as many people like him as possible.
Posted by Mark Harris at 1/04/2009 10:11:00 PM