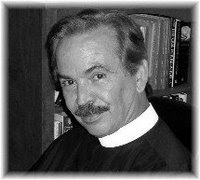 "The Rev. Terry Martin is best known to many Episcopalians as Fr. Jake from his wildly popular blog Father Jake Stops the World. The blog was shut down when Martin went to work as the program officer for evangelism.

His road into the Church took many unusual turns. He left his family at age eleven, was homeless for a few years as a teen, and ended up in reform school. After serving for four years in the Navy, he attended night school for seven years to receive his undergraduate degree from the University of Wisconsin. He graduated, with honors from Nashotah House in 1990. He has served congregations in Fond du Lac, El Camino Real, Upper South Carolina and New Jersey.

In between church assignments, he has been the program director of a homeless shelter and a counselor at a chemical dependency hospital. Fr. Martin loves a well told tale, and is an
incurable bookworm. He believes that it is through developing the art of storytelling that we prepare ourselves for listening to the stories of others, telling our own faith story, while always looking for the places that God’s story touches them both. He and his wife Cherie live in Hammonton, New Jersey." Well, that's what THEY say. We know that Fr. Jake, AKA Fr. Terry, AKA Fr. Martin of the Evangelism Office of the Episcopal Church, etc., is really Fr Guido Sarducci or at least a Fr. Sarducci wannabe.

This has all been well exposed in a PRELUDIUM special in Advent 2006. The cat is out of the bag and it appears so in the case of Fr. whatever his name is.

There has been a new posting at Fr. Jake Stops The World, the source site for our elusive prodder in Christ (rhymes with father). The posting there is heartening, for it means that longing hearts and Friends of Jake will be filled with joy. Fr. Jake is back and there is wild rejoicing in the vineyards. His fans (me among them) are going nuts.

It appears he is coming to Fort Worth and has already been to San Joaquin, a place where he is honored as the carrier of assurance when things were rough. The Grapevine carries a wonderful affirmation of his visit.

And we all remember, don't we dear friends, that Fr. whatever-his-name-is, where ever he blogs, is on a mission from God... Let us be glad and rejoice in it.