Creeping Big Brother-ism: Why the Joint Standing Committee of Primates and ACC matters.

Those of us concerned for creeping big brother-ism in the Anglican Communion need to watch carefully the drift of power towards the Joint Standing Committee of the Primates Meeting and the Anglican Consultative Council.

The Ridley Cambridge Draft Covenant (RCDC) proposes to give a great deal of power to this body, which heretofore has spent most of its time working on such matters as the program for the ACC meetings. The powers to be granted the JSC-P/ACC are those recommended by the Windsor Continuation Group. They are listed in the RCDC in section 4. Preludium has commented on them HERE.

The Primate members of the JSC are elected / appointed as Primates, Presiding Bishops or Moderators out of their several church systems and from that pool the Primate members are elected. Which is to say they are gathered as representatives or spokespersons of the several churches. They are elected to the Standing Committee, however, as individuals from within the group of Primates. As such they have no direct responsibility to represent their own churches there. The Standing Committee of the Primates is an internal organ of the Primates Meeting.

Which is to say the Joint Standing Committee of Primates and ACC has no authority from any of the member churches, but rather the authority of the two bodies who elect them as individuals, not as members of their churches. This makes them, of course, not responsible to any of the churches at all. It is this Joint Standing Committee made up of members of two other bodies, that is given a wide variety of responsibilities and powers under the scheme of the Ridley Cambridge Draft Covenant. 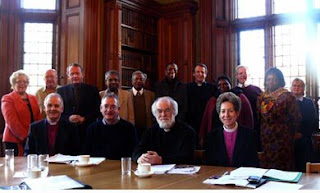 At least in theory this group of fourteen people could in an eight to six vote decide that a church in the Communion had defaulted on some aspect of the covenant and by that recommend to the Instruments of Communion that the church be removed from membership or inclusion in the various "instruments."

Here is what the RCDC proposes that the JSC do: (JSC is highlighted in RED.)

"4.2 The Maintenance of the Covenant and Dispute Resolution

(4.2.1) The Joint Standing Committee of the Anglican Consultative Council and of the Primates' Meeting, or any body that succeeds it, shall have the duty of overseeing the functioning of the Covenant in the life of the Anglican Communion. The Joint Standing Committee may nominate or appoint another committee or commission to assist in carrying out this function and to advise it on questions relating to the Covenant.

(4.2.2) If a question relating to the meaning of the Covenant, or of compatibility to the principles incorporated in it, should arise, the Joint Standing Committee may make a request to any covenanting Church to defer action until the processes set out below have been completed. It shall further take advice from such bodies as its feels appropriate on the nature and relational consequences of the matter and may make a recommendation to be referred for advice to both the Anglican Consultative Council and the Primates' Meeting.

(4.2.3) If a Church refuses to defer a controversial action, the Joint Standing Committee may recommend to any Instrument of Communion relational consequences which specify a provisional limitation of participation in, or suspension from, that Instrument until the completion of the process set out below.

(4.2.4) On the basis of advice received from the Anglican Consultative Council and the Primates' Meeting, the Joint Standing Committee may make a declaration concerning an action or decision of a covenanting Church that such an action or decision is or would be "incompatible with the Covenant". A declaration of incompatibility with the Covenant shall not have any force in the Constitution and Canons of any covenanting Church unless or until it is received by the canonical procedures of the Church in question.

(4.2.5) On the basis of the advice received, the Joint Standing Committee may make recommendations as to relational consequences to the Churches of the Anglican Communion or to the Instruments of the Communion. These recommendations may address the extent to which the decision of any covenanting Church to continue with an action or decision which has been found to be "incompatible with the Covenant" impairs or limits the communion between that Church and the other Churches of the Communion. It may recommend whether such action or decision should have a consequence for participation in the life of the Communion and its Instruments. It shall be for each Church and each Instrument to determine its own response to such recommendations.

(4.2.6) Each Church undertakes to put into place such mechanisms, agencies or institutions, consistent with its own Constitution and Canons, as can undertake to oversee the maintenance of the affirmations and commitments of the Covenant in the life of that Church, and to relate to the Instruments of Communion on matters pertinent to the Covenant.

(4.2.7) Participation in the processes set out in this section .shall be limited to those members of the Instruments of Communion who are representatives of those churches who have adopted the Covenant, or who are still in the process of adoption."

The RCDC in section 4.2 has given to the Joint Standing Committee a variety of powers and tasks that place it in the extraordinary position of being both star chamber and big brother. More, the RCDC has done so on the recommendation of the Windsor Continuation Group, whose authority is limited at best, being as it is a group named by the Archbishop of Canterbury to give him advice on how best to continue the work of the Windsor Report.

Why any Church in the Anglican Communion should give this group of persons, worthy as they may be, ANY power is beyond me. And power is what is at stake.

The RDCD repeatedly says that the Anglican Covenant does not require anything of the Constitution and Canons of any member church. That appears to be true. However, not all matters affecting the Churches affect their canonical structures.

The power of the JSC or some other body to affect the decisions made by member churches is considerable, and in doing so such bodies become de-facto legislative and directorial agents.

One could envision a representative group of the JSC coming again to a meeting of the House of Bishops, as they did in New Orleans, and inserting their concerns in the internal affairs of TEC. One could imagine the JSC requesting time on the agenda of a meeting of the General Convention for some ecclesiastical heavy-weight to come and spell out the consequences of making decisions contrary to the JSC's recommendation that the church delay for a time a decision that appeared divisive. We can imagine such things because they have been done.

There are several problems with this whole proposal:

(i) It may well be that the Anglican Communion has to have some way of saying that churches can join and be expelled from the meetings of the Communion. But there are already ways to do that: If a church is not in communion with the Church of England, the Archbishop can determine not to invite them to Lambeth; if the Primate is not recognized by the ABC, or if the Primates want to as a group, they can un-invite a head of church; if the ACC Constitution spells out how to join the ACC it can also spell out how a church might be invited to leave. Indeed, in the case of Lambeth and the ACC such occasions for exclusion have already taken place. Why do we need more?

(ii) And, given that some may argue that we do need a body to which matters of dispute are referred, why should it be the Joint Standing Committee, a body of individuals representing only themselves at that point?

It may be that the Joint Standing Committee is a really good idea. But unless we talk it out we will never know. But who is interested in giving the JSC, an unexamined body, authority to act as big brother?