There is always too much to read, too much to follow, on the web and on the blogs. So I keep touch with a variety of folk left to right who in turn point to interesting articles and blogs that keep the little grey cells sparked.

BabyBlue, whose musical, poetical and literary sensibilities I admire enough to make the trip to her site regularly even when she drives me nuts on some issues, points to an article by E.E. Evans titled, Lines in the sand. I knew Elizabeth when she worked for The Episcopalian. Elizabeth Eisenstadt Evans among other things writes regularly for GetReligion. Many of the writers there are well known in Episcopal Church circles. It is very well written (of course) and challenges the various attempts (including my own) to get to the bottom of what the Forrester issue is about. Read it HERE.

"Doctrinally speaking, the denomination is by no means monolithic.

It includes at least this many subsets. Doctrinal conservatives (though a shrinking number) who disapprove of gay ordination and often women’s ordination. Doctrinal conservatives who are OK with ordaining women but find ordaining gay’s a bridge too far. Some who consider themselves orthodox according to the creeds (and this one is probably hardest for conservatives to fathom) who approve of ordaining gays and allowing the blessing of same sex relationships. Liberals (which certainly includes some bishops) who think a little ferment is good for the church and don’t mind losing a few phrases of the Nicene Creed. Liberals who would like to rewrite the Creeds (which apparently includes Forrester). Then there is a group who are hard to pin down on creedal orthodoxy but can’t stand bad ecclesiastical process (Forrester was the only candidate on the ballot). And I know I’ve left some people out."

BabyBlue might remind you, and I certainly will, of a grid put together by Graham Kings. See HERE for the way Graham parses the field. Additionally BabyBlue also accessed a grid that places people in a similar quadrilateral environment. See my blog on her grid HERE.

So with the Graham Kings and Baby Blue quadrilaterals in place, I propose to sketch out the E.E. Evans tape measure of Episcopal Diversity: 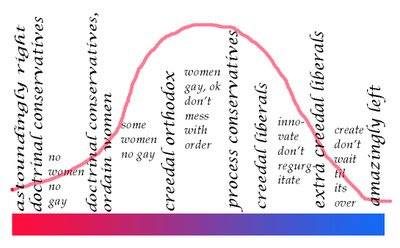 The bell curve seems to suggest that the most people probably fall in the creedal orthodox to process conservative lump, somewhere between "women, gay OK, don't mess with order" and "innovate, don't regurgitate" positions. Forrester's election, it appears, fell off the curve.

Still, some of us can relate. There are times when it seems meet, right and our bounden duty to "create, don't wait til its over."