Philippines ecumenical shout out against tyranny

The National Council of Churches in the Philippines is not a timid organization. Made up of ten member churches, the NCCP has long been a leader in upholding the rights of indigenous peoples, and holding the government to account for its actions. They have just released the following statement regarding what they believe to be an attempt to postpone the 2010 elections. The Executive Secretary of the NCCP is Fr. Rex Reyes, a priest of the Episcopal Church in the Philippines and a good friend.


I am posting this as an example of forceful witness by a small Anglican Church with a large voice in both ecumenical and national circles. The Primate of The Episcopal Church in the Philippines, Prime Bishop Edward P. Malecdan and Lawyer Floyd Lalwet will be at General Convention representing the ECP. 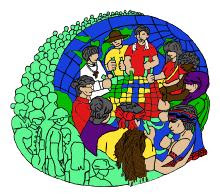 I am also posting this so that readers will keep the ECP, the NCCP and their leadership in your prayers these coming weeks. The statement they have made will have repercussions.


See the ENS article on this HERE.

The National Council of Churches in the Philippines (NCCP) strongly condemns the Malacaang-backed move of the majority in Congress that railroaded the passing of House Resolution 1109 transforming Congress to a Constituent Assembly (Con-ass). It was plain and simple tyranny of numbers for self-serving interests. They have run roughshod on the Filipino people's democratic rights to choose their leaders in 2010. It smacks of sheer arrogance, a quintessence of compunction.

The move is an obvious attempt to postpone the 2010 elections, a process wrapped in the agenda of those who want to perpetuate themselves in power, including President Gloria Macapagal-Arroyo. Moreover, those pushing for Cha Cha equate economic development with further liberalization of the economy and the plunder of the national patrimony.

Our experience over the years as a nation has shown that trade liberalization and globalization only worsened the impoverishment of the vast majority of Filipinos. The current global economic crisis shows the folly of this economic paradigm. Cha Cha will only serve to further divest the present Constitution of its nationalist provisions.

We reiterate that the NCCP is not against Charter Change. The present Constitution stands in need of substantial improvements. But not for the wrong reasons, definitely not before the 2010 elections, and certainly not through a legislative body dominated by a majority of devious and scheming politicians with vested interests, has not shown independence from the Executive Branch and much less displayed genuine loyalty to the people.

Thus, the NCCP enjoins its member churches and the general public to condemn and stand up against this latest travesty and maneuvering to tinker illicitly with the Constitution. Let us remain steadfast and vigilant. Let us not allow anyone, especially our leaders with vested interests to trample upon our God-given right to participate in the political processes that directly affect us and our children.
Posted by Mark Harris at 6/10/2009 04:27:00 PM