Moving on with Election of Bishops and the Anglican Communion 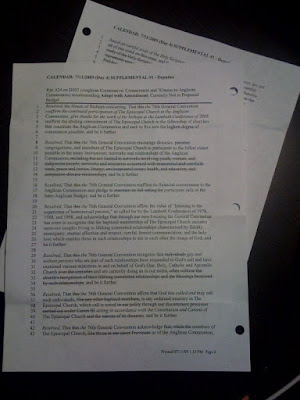 The House of Deputies received today the revised version of D025, "Commitment to Witness to Anglican Communion." It will be the primary piece of legislation on matters related to the Election of Bishops and the Anglican Communion from the World Mission legislative committee to the full house. It was the result of lots of work by the subcommittee of the Legislative Committee on World Mission, and a sub group of that given the task of actually writing up a proposed text. I was delighted to be on the working group and on the subcommittee on B033 matters and feel this text, based on that of Deputy Snow and others, rightly balances the engagement with the Anglican Communion, experience and understanding within The Episcopal Church and the actual situation of gay and lesbian persons in The Episcopal Church.

The issue tomorrow, (Sunday) when it will be brought to the House for debate and action is whether or not attempts to revise it will meet with appreciation or not. I am hoping the measure will pass without revision.

Here is the current form of the legislation:

Resolved, the House of Bishops concurring, That this the 76th General Convention reaffirm the continued participation of The Episcopal Church in the Anglican Communion; give thanks for the work of the bishops at the Lambeth Conference of 2008; reaffirm the abiding commitment of The Episcopal Church to the fellowship of churches that constitute the Anglican Communion and seek to live into the highest degree of communion possible; and be it further

Resolved, That this the 76th General Convention encourage dioceses, parishes congregations, and members of The Episcopal Church to participate to the fullest extent possible in the many instruments, networks and relationships of the Anglican Communion, including but not limited to networks involving youth, women, and indigenous people; networks and ministries concerned with ecumenical and interfaith work, peace and justice, liturgy, environmental issues, health, and education; and companion diocese relationships; and be it further

Resolved, That this the 76th General Convention reaffirm its financial commitment to the Anglican Communion and pledge to maintain its full asking for participate fully in the Inter-Anglican Budget; and be it further

Resolved, That this the 76th General Convention affirm the value of "listening to the experience of homosexual persons," as called for by the Lambeth Conferences of 1978, 1988, and 1998, and acknowledge that through our own listening the General Convention has come to recognize that the baptized membership of The Episcopal Church includes same-sex couples living in lifelong committed relationships "characterized by fidelity, monogamy, mutual affection and respect, careful, honest communication, and the holy love which enables those in such relationships to see in each other the image of God" (2000-D039); and be it further

Resolved, That this the 76th General Convention recognize that individuals gay and lesbian persons who are part of such relationships have responded to God's call and have exercised various ministries in and on behalf of God's One, Holy, Catholic and Apostolic Church over the centuries and are currently doing so in our midst, often without the church's recognition of their lifelong committed relationships and the blessings bestowed by such relationships; and be it further

Resolved, That this the 76th General Convention affirm that God has called and may call such individuals, like any other baptized members, to any ordained ministry in The Episcopal Church, which call is tested in our polity through our discernment processes carried out under Canon IIIacting in accordance with the Constitution and Canons of The Episcopal Church and the canons of its dioceses; and be it further

Resolved, That this the 76th General Convention acknowledge that, while the members of The Episcopal Church, like those in our sister Provinces as of the Anglican Communion, based on careful study of the Holy Scriptures, and in light of tradition and reason, are not all of one mind on this issue, and that Christians of good conscience, based on careful study of the Holy Scriptures, may disagree about this issue, the validity of the Church's sacraments comes from the action of the Holy Spirit in and through them, not from the frail humans celebrating them in God's name disagree about some of these matters.

Over on The Living Church there has been this post, "Resolution to Repeal B033 May Face Test in HOB."

Episcopal Cafe's "The Lead" has this:Walking back B033, revised resolution D025 clears committee"

The upshot of all this is that passage of D025 does not end caution and restraint expressed by any bishop or standing committee convinced by the arguments of the Anglican Covenant or the various pronouncements following the Windsor Report. What it does do is say that The Episcopal Church will not mandate such caution and restraint by legislative action.

The resolution also acknowledges the realities of life in a diverse community in which there are openly gay and lesbian couples, some with children, who participate fully in the life of the Christian community.

The resolution affirms the Anglican Communion, the ministry of the baptized, the openness to the process towards ordination, and the ministry of gay and lesbian persons.

It also acknowledges the fact that there are real and deep differences in the understanding of Scripture in the light of tradition and reason on this and other issues.

I hope that the resolution will be assented to with very few if any revisions.

The Living Church suggests that the resolution will be difficult for the House of Bishops. It may. But why? It does not say anything at all about B033 being right or wrong. It tells the truth about the realities of the church. It affirms the canonical process concerning ordination. It places matters of conscience in the hands of the electors and those confirming election, not placing outside restrictions on the exercise of conscience.

Some in the House of Bishops may believe that dropping B033 will be understood as an end to the moratorium and thus place our rightful place in the Anglican Communion in jeopardy. 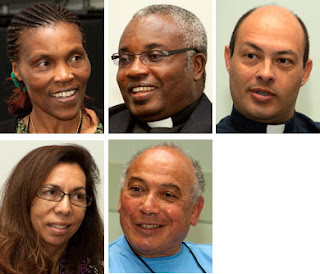 The fear of being cast out of the Anglican Communion has been challenged by several visitors who came to the House of Deputies today, most importantly among them being Dean Jenney Te Paa, principal of Te Rau Kahikatea, College of St. John the Evangelist, Auckland, New Zealand.. Both believed we ought to have courage in our convictions and assured us that we have friends in the Global South and in the Anglican Communion. The ENS article on their visit is titled, "Anderson's international guests reflect on uniqueness of convention.' One of the speakers, the Rev. Luiz Alberto Barbosa, president of the House of Clergy and Laity of the Episcopal Anglican Church of Brazil said, "Any church can make a decision because of fear. Fear cannot be our counselor … don't be afraid of being excluded from the Anglican Communion because you are not alone. There are a lot of other provinces and people that support what you are doing."