Reflections on the Incarnation of God: Christmas with Hindu friends.

After 12 days in India I know much less than when I started. Still, this time of conversation and experiences with friends and with the friends of friends has confirmed for me why it is that I am a Christian. At the same time I am convinced anew that, regarding people of other faiths, we Christians need to listen more and be more open to God's gracious intent in what has been revealed to other peoples. 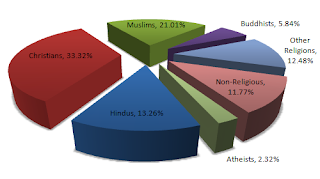 In terms of the worlds "great" religions, Hinduism is the third largest group. More than a billion people are Hindu, some 900 million living in India. Hinduism is hard to describe from the outside. It is a large collection of the thinking of seers, sages, poets, philosophers, and the actions of a whole huge people constantly distilling the experiences of each day into a recognizable but multi-leveled religious perspective.


In the past days, traveling with a devout Hindu family, I have come to appreciate with greater depth the "deity drenched" world in which they live. Although there are many gods in Hindu literature and practice, it seems there is at the core the one God under / behind / pervading all of Creation and all the varied religious and spiritual practices of Hindu faith. And if we listen well we will hear much of our own spiritual sensibilities echoed in this great cloud of witnesses that make the whole of the Hindu people as people of faith.

From the outside it seems to me that Hindu religion is incarnationalism gone mad. They certainly have got the incarnational sensibility: God is present in Creation, lives through the lives of people, all living creatures and even the stones shout out at times. There are such strong echoes of what we know and particularly remind ourselves of at Christmas:

My sense is many Hindus would resonate with the great incarnational hymn at the beginning of the Gospel of John,

The true light, which enlightens everyone, was coming into the world.

He was in the world, and the world came into being through him; yet the world did not know him. 11He came to what was his own, and his own people did not accept him. But to all who received him, who believed in his name, he gave power to become children of God, who were born, not of blood or of the will of the flesh or of the will of man, but of God. And the Word became flesh and lived among us, and we have seen his glory, the glory as of a father’s only son, full of grace and truth"

The notion that that God is light and life, and that in that Light we too shine with the Light of the World in us as well is not far from Hindu thought.The light of "enlightenment" and the attainment of self realization is not different in kind from the "light that enlightens."

So I am inclined to keep listening and to hold myself ready with an open heart and mind to receive the wisdom this incredibly ancient religious tradition brings to the world. 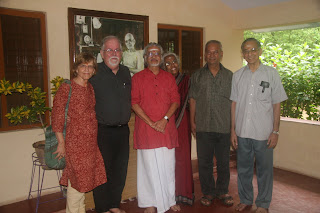 Ganisha, a very wise man we met in our travels, commented that our relations with one another, and particularly about religious matters, would be improved if we lived into our discussions on a different level, in conversation that grew from respectful listening instead of responding to the other in debate, where our forceful presence is seen not in the strength of where we stand, but in the ability to win a contest. Debate makes listening a strategy. Telling the truth as we experience the truth is a stance, is a way of being God's incarnation in the world.

Being here in India the debates in Congress on the health bill, the various local issues which concern those of us who live in Lewes, Delaware, the progress of the Eagles, and a whole host of concerns having to do with the Anglican Communion and the Episcopal Church take second place, mostly, to loafing about (as Walt Whitman was given to saying) at my ease.

Still, I can't help but think that hanging out with Hindu folk has been of great value as I also begin to think of return to the issues that only two weeks ago loomed large in my life.

This Christmas we will in all likelihood not be at Church. St. Georges Cathedral in Chennai, part of the Church of South India, will have a grand do on Christmas Eve, with the Bishop preaching. It starts at 11:30 PM and will go on for some time. But we and our hosts take off early on Christmas day for New Delhi. We will not be exchanging presents Christmas or Christmas Eve, save for some for the children. We ARE our presents for one another, our companionship deepening every day.

But we will indeed celebrate the Feast of the Incarnation. We will tell it our way, and others will tell it theirs. We will all I think give thanks to God, the source of all we are, that God has not left us without the knowledge of his presence among us. For me, at least this Christmas, Hindu people have helped me see anew just how powerful a thing it is to say that in Jesus all the fullness of God is pleased to dwell.

As for the struggles in the Anglican Communion: several hints from Hindu spirituality -

(i) Mahatma Gandhi wrote that the matchless way to attain self-realization, is renunciation of fruits of action.That's the core center around which the Bhavagad Gita is woven. The self-realization attained is our participation in incarnational living. We live incarnationally to the extent that we both work to act with justice, compassion and stand in the truth as it is given us and are willing to live even as God does among us in Jesus Christ. Even Jesus did not call down the forces he might have in order to guarantee the results he wished.

So the Gita and Gandhi suggest, do what we do with the deepest reverence for truth, for life, and for justice possible, but do not be overcome by attachment to the desired end. We must learn to let our "yes" be "yes" and our "no," "no." Everything else, for example, having "our way" will eventually become an obstacle to enlightened action.

(ii) The "Listening Process" needs to be totally rethought. So long as listening is listening to arguments for or against, or to recounting of experiences that support or do not support a particular position regarding human sex expression by faithful people, the process is a prelude to judgment. Judgment makes listening a listening FOR. We will listen for words that support our claim, or go against the claim of others. We will listen for the "therefore" at the end of statements, rather than the content of the statement itself. We do need a listening process, but the process we need is not a way into deeper decision, but deeper respect and love.Perhaps a better listening is not receiving statements from people and groups, it is people and groups engaging one another in respect and love.

(iii) The goal of all our efforts to keep the Anglican Communion alive is not orthodoxy and collective agreement on terms of engagement with one another. The goal of our efforts is to be yet another effort to make God's presence known in the world, not in what we do, but in how we love one another and the world in Christ's name. If our actions are of the Light of the World, then we need not worry about desired ends, for the Light is already here. If we listen in love, then the Light that is present in each of us will shine forth, and we will see the light of Christ in it.

Perhaps then the Anglican Covenant is a worthy exercise in telling the truth about who we are, but a terribly mistaken instrument of unity. Our unity is not in ourselves, but in our actions to the end that all people know themselves as people of Light and Life. And to the extent that the Covenant attempts to bring conformity it is simply untrue to the multiplicity of ways in which we experience the light of the Gospel.

The point at Christmas is simple: The Light does indeed shine in the darkness and the darkness cannot overcome it. In Jesus all the fullness of God was pleased to dwell, and Jesus calls us to be that light as well. So off to a Hindu Christmas. Of to church, then...

May your Christmas be blessed, the Incarnation known, and may all the sages jump for joy.