Election in the Anglican Church of Aotearoa, New Zealand and Polynesia. 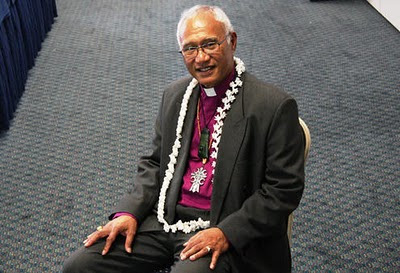 Yesterday Bishop Winston Halapua was elected by General Synod to be the bishop of Polynesia and by that becomes one of the three Archbishops of the Anglican Church of Aotearoa, New Zealand and Polynesia. The process of election was described as follows by the online newspaper of the Province:

"In the Anglican scheme of things, bishops are declared elected only after they have been approved in a three-part process. They are nominated at the Electoral College – and that nomination must then be approved by the other bishops in the church, and (assuming there are no hitches there) by General Synod, which functions as the parliament of the church.

The final stage of the electoral process, the balloting of members of the General Synod, took place during their Gisborne meeting."

I have no idea just who the Electoral College consists of (I am hopeful that Peter Carrell of Anglicans Down Under will inform us), but the three level election process shares some parallels to our own: election and then ratification / confirmation by a second level, either the bishops and standing committees or by the House of Bishops / House of Deputies when they are meeting in General Convention. I wonder if there is anything like diocesan election by local delegates? Interesting.

On the other hand, the description of what followed is pretty much unique:

"There followed a series of brief but moving presentations from representatives of each of the three tikanga.

These were led by Mrs Lola Kolomatangi, on behalf of the Diocese of Polynesia – who said it was the custom of mothers in the Pacific to gift “a cultural vestment” on its new leaders.

With that, Polynesian women brought forward various gifts and tokens – Tongan tapa, and three garlands, each representing Fiji, Samoa and Tonga, which they placed around Bishop Winston’s neck.

He, in turn, took two of those lei and draped them around the necks of the two existing Archbishops, Brown Turei and David Moxon.

Herewini Parata moved to present the greetings of Tikanga Maori to the new bishop – and then, with the help of Archbishop Turei, he tied a pounamu taonga, a greenstone pendant, around Dr Halapua’s neck.

He led a haka – and then it was Bishop Ross Bay’s turn to present the greetings of Tikanga Pakeha to the new Bishop, with a large floral bouquet.

As is the Fijian custom, the Rev Sam Koi, responded in Fijian on behalf of the new Bishop. Surrounded by the other men in the Diocese of Polynesia delegation, all of whom were on bended knee, he told Synod that they would return to their countries and churches, telling of the honour bestowed on their bishop by Synod.

Bishop Halapua himself said nothing – until he left the conference hall, and began the first of the day’s media interviews."

Now that is what Anglicanism is good at doing... the inclusion of culturally important exchanges and actions in the life of the church. It seems a profound and wonderful set of exchanges. I particularly like his being given three lei and giving two away, one to each of the other Archbishops in the Province. It reminded me of an important book on gift giving, "The Gift" by Lewis Hyde, in which he suggests that gift giving is in many cultures separate from ownership. Gifts are not capital, but communal, and the gift always moves as community and relationships require. I like that. I am sure there is a lot going on in the exchanges but the fact that these are important enough to make the news is assuring of the broader sense that order, custom and common life are primary.