Bishop Minns has accused The Episcopal Church of bribing African bishops (see my previous post) but of course that is only a minor stain compared to the great pollution he charges The Episcopal Church and other parts of the Anglican Communion that "ignore the plain teaching of the Bible and the unique role of Jesus the Christ as the only Savior...disregard the delicate balance of relationship between men and women.. and promote disobedience to the revealed Word of God" Here is what he had to say in his Pastoral Call to CANA this past week. 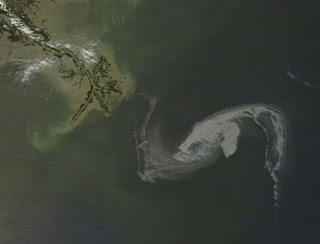 "We are in the midst of a crisis. There is a tide of pollution that threatens the church. When the decision was taken, years ago, to ignore the plain teaching of the Bible on the unique role of Jesus the Christ as the only Savior; to disregard the delicate balance of relationship between men and women that God has established and promote disobedience to the revealed Word of God … all hell was let loose. It didn’t look that way at first.
No one imagined the devastation that would erupt – some people still don’t. They still don’t believe it will affect them. They think that they can continue to live in their own little worlds. After all it was miles away and years ago. How could it possibly affect them? Just a few innovations in the name of progress and enlightenment! But now the cost has become clear. No one can avoid the stain. Everyone is affected by it. A church that was renowned for its aesthetics in music and liturgy, a beautiful church with a love for history and a global vision is now seen as the church that has lost its way and forgotten its message. A church that was full of life and missionary zeal is now shrinking rapidly and struggling to survive."

Just to be clear - the charges are as follows:
ignore the plain teaching of the Bible on the unique role of Jesus Christ,
disregard the balance of relationships between men and women that God has established,
promote disobedience to the revealed Word of God.

The charges are mostly against The Episcopal Church, although later in his address he has relatively unkind things to say about the Archbishop of Canterbury's way of dealing with Communion matters.

He says, "the decision was taken years ago..." to ignore, disregard and promote.  How many? And what was the decision?

The charges are all those brought at one time or another against Bishop John Shelby Spong, retired of Newark, who in a series of books, articles and addresses raised questions about the way in which the uniqueness of Jesus Christ was understood by the Church, the place of women and homosexual persons in the life of the church and called for a new way of engaging and understanding the Word of God. The charges "fit" the right wing snit about Bishop Spong.

They don't fit so well with the publication of the "new" Book of Common Prayer (1979). They don't fit the specifics of the concerns about the church's growing inclusion of gay and lesbian persons.

No, they "fit" as charges about Spong. So the "decision" that "was taken years ago" was the decision by the House of Bishop of The Episcopal Church not to censure Bishop Spong (1987-89).

At least that is how I read it.  But who knows, the notion that there was a DECISION made, as if it were a deliberate process and end point in mind, if delusional. So if a delusion then the time and source of the so called decision is pretty much any one's guess.

Bishop Minns is in an accusatory mood these days.  It is all the fault of some mechanism of hellish construction. THEY decided to dump Jesus Christ as unique, throw the relationship of men and women out of balance, and generally promote disobedience to the revealed Word of God. THEY "made the decision."

Delusional thinking is a difficult position to work from in trying to lead a community of churches. CANA is what it is, and good and caring Christians belong to CANA. Fine.  CANA got there by less than transparent means but then that can be said for most churches. But when its lead bishop feels it is necessary to repeat the dump again and again - that all is due to pollution by people who are ignorant, disregarding and disobedient (read the leadership of The Episcopal Church) - we might well begin to wonder. Perhaps he protests too much.

Maybe the decision was that he apparently could not get elected in a regular diocese of The Episcopal Church.