The Fault Line Runs Right Through Here: And when is the Anglican quake?

(As a treat you get to hear her at the end of this essay.) 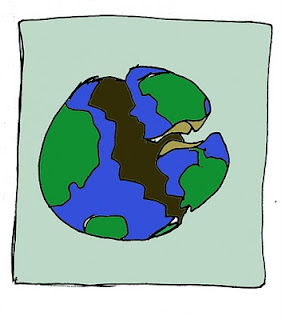 The word out there in the alternative universe called the Internet is that the Anglican Communion is on the fault line.

It is something of an Internet sport to name the moment when it all came or will come tumbling down, when the Anglican Communion ceases to be a single large conglomerate family of churches with splinter groups that broke off or splintered people who simply wandered off, and instead breaks in two, with major landmasses pulling away from each other as if part of some prior large ecclesiastical continent, some Anglican Pangea, but now split.

Has the Anglican Communion broken in two? Will it shortly? And why?

These of course are much too late and too small to constitute the basis for the fault line cracks. The real basis for the break, if it comes or has come, lies deeply encrusted under layers of fairly predictable squabbles about personal and corporate moral life.

Keeping ourselves "unspotted from the world", to use James' term, involves moral behavior, behavior based on a set of ethical principles derived from various authoritative sources, among them religious leaders, prophets, societies, and sacred texts, and the authority runs right down to the leaders of local congregations and the community of moral elders who put the dot on the "i".

Regrettably the moral behavior of Christians in most ages and for most communities is determined by the lens of that community and those lenses are ground by leaders whose sense of ethical priorities is based on secondary engagement with the "stuff" of purity but a primary engagement with the rod of authority. This works West or South. Everybody gets to play the moral authority game.

To put it plainly, the break in the Anglican Communion is occurring because church leaders and rulers believe their moral authority is being threatened.  The secondary  ethics that derives from proof texting Scripture, the invocation of an overly simplified "natural law" philosophy and cultural bias gets the churches of the Communion in all sorts of trouble and yet it is that secondary ethics that guides those exercising authority. It is being challenged and the authorities who still rely upon that ethic, or whose authority is dependant on those leaders, are mad as hell.


The charge is being made that the churches of"the West" have succumbed to the ethics of a postmodern, post Christian, elitist culture that accepts homosexuality as "normal." This is bunk, but never mind - radically conservative church leaders both in America and leaders in other churches in the Anglican world have been quick to condemn "the West," in Anglican speak the Church of England, the Anglican Church of Canada, The Episcopal Church, and any beholden to them.

At the meeting of the All Africa Anglican Bishops this past week there was plenty of this sort of "West" bashing.  Where was the counter to that argument?  Apparently at the most in the silence of some Western guests, including the Archbishop of Canterbury.  It must have been hard to sit there, quietly.

The break, at least on this level, is one of perceived ethical and moral difference, but is really about authority and control.

At some point we will better have a sense of what were the fracture points that led to this fault line opening and splitting the Anglican Communion into two, but here are several prime candidates:

To the extent that this has worked we are ending up with two very different bodies growing from the Anglican Communion. The one continues the proposition that we are a fellowship of quite different but mutually supportive bodies, the other that we must become a world wide Church with a single mind, one not surprisingly marked by conservative evangelical norms. In either case The Episcopal Church is diminished, at least for publicity purposes, and made marginal. As far as the religious conservative tactics are concerned, it doesn't have to work forever, only for a time. But it will produce fracture, and that's the point.

(ii) A second fracture point is the relative obliviousness of the churches of the West to the realities of its missionary endeavors. They were accomplished at great cost to the moral life of those churches and to the disorientation of the churches they established in what was mostly a colonial world.  There is no apology by "mother" churches that their missionary endeavors were the product of church and state collusion in colonial rule.

The first colonial governor of the US occupied Philippines and the first Episcopal bishop of the Philippines arrived on the same boat.  That the governor later became President and the Bishop revered by the church there is perhaps mitigating, but the fact remains - the church arrived with the occupying powers and remained there without criticism of colonial rule. That was one example only, of course. The same was repeated over and over again across the Anglican world.

There have been notable exceptions to the acquiescence of church to occupying power, and there have been notable apologies for collusion, but for the most part the missionary "mother" churches came, engaged, developed and then left without any formal recognition of their part in colonial expansion or the exploitation of circumstance.

(iii) A third fracture point is the concentrated effort of leaders holding minority positions on some of the issues of life in The Episcopal Church to bend the church to its positions and to find support and authority from what it terms "the majority of Anglicans" worldwide.

These leaders charged The Episcopal Church and its leadership with abandoning the Gospel.  In doing so these leaders also opened themselves to the charge of abandoning The Episcopal Church.  In various ways they invented a unique argument for "jumping ship" to other jurisdictions and then from there to a new boat, the emerging Anglican Church in North America and its allies in several Provinces and from there arguing for a second world wide Anglican body (also in formation.)

They have played this card so well that they have come close to convincing leaders in other churches in the Communion that a new post-colonial Anglicanism is at hand, that African Anglicans are at the lead, and that the old Western order is defunct.  It is unclear that they can make this stick. Meanwhile they have wreaked havoc with an ancient principle - don't spit in the soup, we've all got to eat.  It will return to bite them.

Part of the fault line, part of the fracture, is American ecclesiastical hard ball politics played out in the arena of international Anglicanism.

(iv) But the major fault line / fracture is this: The fault line runs right through the power attributed to Primates - to heads of churches - in the Anglican Communion. These church leaders have taken upon themselves to speak in Anglicanism on an entirely different level than any mere collection of bishops might.  There is no warrant for any moral authority in the church based on the teaching role of a collection of Primates. There is no Anglican magisterium. But watch it, there  just might be around the corner, at a place where they sell the Anglican Covenant.

The primate is a bishop, and any Primate other than the one in a particular Church, who holds office in that body by its own charger and rules,  is simply a "foreign bishop."  The Pope qualifies as such a bishop, and for The Episcopal Church so does the Archbishop of Canterbury or the Primate of the Southern Cone.

In this case the fault line runs right through the community of Primates of the Anglican Communion, beginning with the Archbishop of Canterbury.  If they do have a teaching role in the Communion they have exercised it poorly.

Their efforts to deal with the ordination of women was a disaster.  The patchwork of provinces who do ordain women began to constitute one sort of mass and the provinces who do not another.  The well remembered notion of Mutual Responsibility and Interdependence in the Body of Christ died the death of the innocent long before the current "troubles." It died because leaders of the churches were neither mutually responsible or interdependent, and the notion that the Body of Christ might be something other than the actual organized church lay unimagined.  By the time the Primates got their hands on matters of mutuality and interdependence the argument had moved from sharing what we have and who we are to enforcing moral behavior - from sharing to control.

The single most damning bit of Anglican Communion activity in recent years has been the development of Primate's meetings from occasions for sharing to occasions for control.  The Archbishop of Canterbury has been as much party to the efforts to control as have other Primates and the current situation where it appears that some Primates will not attend Primates meetings so long as others (notably the Presiding Bishop) attend is in some part as much the ABC's fault as it is the threatening Primates.

The question of who controls the Primates Meetings and to what end has overtaken the purpose of those meetings, and the 'enhanced' role given the Primates has been a source of new and divisive energy in the Communion. That role was strongly supported by the office of the Archbishop of Canterbury and without much in the way of cautionary words. The first cautionary word might well have been to suggest that the Primates Meeting is simply a meeting for conversation and that no one is expected or required to attend.

It is time to give the Primates Meetings a rest. A long rest.

The Communion can get along just find without their meeting.

So, when will the quake hit?  Well, its hard to tell. After all the Anglican Communion is rather spongy land and the quake gets absorbed in its untidyness. But my sense is somewhere between the time of removing Episcopal Church members on Anglican Communion ecumenical discussion committees (this last Spring) and the next Primate's meeting where the "voice" of the 400 African Bishops will be represented by the Primates of the Churches and translated into control mode for the benefit of the decadent West. Some of the Primates will use their presence or absence as an effort to control the future of the Anglican Communion or to signal that indeed there is a new and different Anglican Communion right around the corner, ready to serve you.

The fault line runs through here. And when and if it happens there will be two Anglican continents, and perhaps a number of islands in between.
Meanwhile, most of us will be about the work of giving and receiving from the bounty that is God's Grace in the Church as we know it.  But we know this: the fault line runs right through here.


And those who break and cease to be companions on the way will have their reward.