Gracious Restraint Turns Out To Be Not So Graciously Requested, Again.

Every once and a while a little consistency is in order.  I used to think that "gracious restraint" was a snotty way of saying "do this or you'll be sorry." I still think that now. And, just to be clear I will think that in the future. So, lets hear it for consistancy.

Canon Kearon wrote on Thursday concerning the person from the Province of the Southern Cone who serves on the Inter Anglican Standing Commission on Unity, Faith and Order, removes that person from membership, inviting him to serve as a consultant.  This he had previously done to members of The Episcopal Church serving on faith and order committees.  He too is consistent.

He and the Archbishop of Canterbury, acting quite on their own as appointing officers of the ACC, have been wrong on this one from the beginning. We should receive the current dismissal with the same concern that we received that of the dismissal of members of TEC.  It was wrong then. It is wrong now.

Canon Kearon writes,
"These decisions are not taken easily or lightly, but relate to the gracious restraint requested by successive meetings of the Instruments of Communion and the implications for Communion bodies when these requests are not honoured." (my emphasis)

I don't suppose there is any way that English might turn out to be a common language across the big waters, but here in the little town on the bay facing right on those same big waters, from the Western side,  a request is an asking.  If it turns out that not doing what was asked is met by threat of "implications" because the requests are not honored, then it was not a request. It was a command.

Now if the Archbishop of Canterbury, or the Windsor Report, or the Primates, or whatever, were to command that certain activities be restrained, graciously or otherwise, the whole blinkin' Communion would walk.  So of course one can't say "command."  And there comes the nicety of English as a common language. The head office can say "request" and we will all know they mean "command," but they won't have to say it.

Even common folk here on this side of the big water get that.  They do in South America as well. For a long time up North here and down South there folk who settled in the one or the other place both pushed aside the people living there and in turn got pushed around by distant governments in Europe who seemed to think that command was so much their right that they only needed to request and, behold, it was done.

Out here, however, that prerogative of distant rule was not taken to with much kindness. So, cussed as we all were (and often still are) up and down the Americas settlers demanded that plain language be used. If you command, command and see if we follow orders.  If you request, make it a real request and dump the threats. After a while, of course, we moved to a place of independence from such rule.

If someone believes we in TEC collectively  or even in the small town by the bay from where I write is in any way dishonoring or disgracing the Church, let them not request, let them demand and command and be done with it.  And when they demand let them be prepared themselves to deal with the implications.

I can safely say that here in Lewes the implications would be considerable, involving as it does folk who believe they are honoring and gracing the Church about as well as any, given that we all fall short. We would not be amused by commands from afar. We  would honor those making requests quite independent of doing what was asked by them. We would certainly invite them to church.  We might invite them for lunch. Who knows?  But we would not take kindly to being ordered around with smooth words and smiles.

Perhaps it is time for this foolishness to be recast.  Throwing people off IASCUFO serves neither the honor of the Church, the Communion or even the Ecumenical community.  If it weren't for the place cards that say where the members are from, one might find the actual Christian presence of one or the other of these persons was of great consequence to the future of ecumenical work.

Instead of throwing these people off IASCUFO, get honest.  This is about member Church non-compliance. But from what instrument can the Archbishop of Canterbury or the Secretary General remove a member Church?  This business is rapidly reducing the ability of the Archbishop to be a "focus of unity." 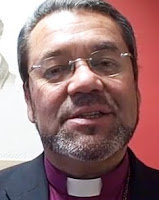 Meanwhile, of course, Bishop Tito Zavala will join the ranks of the rejected. He is in honorable company. Remember Bishop Robinson could not go to Lambeth officially. Professor Grieb has been disinvited from IASCUFO.  The Rev. Thomas Ferguson,  the Rt. Rev. William O. Gregg, the Rt. Rev. C. Franklin Brookhart, Bishop of Montana, and the Very Rev. William H. Petersen are all off ecumenical dialogues. Well that's getting to be a small room full. After a while the rejected might be a large enough group to have coffee somewhere and work out a bit of missionary strategy based on scripture, reason and tradition... you know, like Anglicans muttering their way to the promised land which turns out to be full of people who were there first and might actually inform their efforts. You know, like Anglicans, who live daily the ecumenical future of the whole church.