Its hard to know just what they drink down there in AnglicansDownUnder, but they have taken a mashup of ideas from several other blogs and picked out of what was found a core notion that is challenging and worth thinking about.
Here is Peter Carrell putting it to us:
"So here is the idea, which extends the concept of suspension. Let's suspend the whole Communion: all committees, all Communion wide roles. Let no committee meet and no primates travel on 'Anglican Communion' business. Say for twenty years." 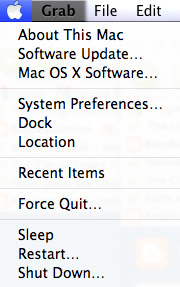 Those of us using Macs know about this: Its on the list, just after "Force Quit."  It includes the options, "Sleep," "Restart.." and "Shut Down."
The idea would be to put the Angican Communion (as an institutional entity with various committees, instruments, etc) on hold for twenty years. Then, one supposes, one could "restart" or "shut down" as wished.
There is considerable merit to the idea. Of course, given our polity (such as it is) some of the instruments of communion would have to decide themselves not to meet. So ACC would need to first meet and then suspend meeting. Others, like the Primates and Lambeth, are invitational. So one supposes the Archbishop of Canterbury could simply determine not to invite.  As for the work of the Anglican Communion Office, that could be temporarily disbanded and its work taken up by whatever province or network that might wish to do continue talking and working together.
Peter then goes on to say,
"During that time Anglicans will make choices about meeting together, about inviting this one and that one to preach and to preside, and about conferences of various kinds. Choices will also be made about ordinations and liturgical services. After twenty years some clarity will emerge about which Anglicans want to be in a formal relationship with each other and which do not. Or, indeed, clarity may emerge about never again attempting to maintain a formal "Communion". During those twenty years the evolution of global Anglicanism will take place without current stresses and strains, and without displays of pique and hurt about who is in and who is out.

The plus side is the rather attractive notion that we could let it all shake out. Anglican folk would do what they are more or less doing anyway.  The question of what would happen to the dialogues with other churches and with other faiths would continue on the one level that counts - church to church. There could still be other agreements on intercommunion, recognition of ministries, and so forth, but they would be, as they are now between specific Anglican Churches (CofE, or TEC, or ACoC) and other Churches (The Methodist Church in England, the ELCA in the US, etc).

What about the breakaway folk of the Anglican Church in North America, which sets out to be the Anglican "voice" in North America? Well, in twenty years they will be what they will be. My sense is that they will top out at about 90,000 and then slowly decline as younger people wonder what all the shouting was about. That will lead to a split up of the various groups in ACNA. The sub groups will remain on friendly terms, but Bishop Minns and Bishops Schofield and Iker will find themselves in different camps, AMiA will go its own way, the Reformed Episcopal Church will discover its own reason for being.  They will work together perhaps, but they will not be together.  The African Churches who came to the rescue will lose interest.


So maybe the evangelical voice of New Zealand is on to something.


But I think not. The temptation to think that world-wide and unified somehow equates with honoring the possibilities that we all may be one is too strong for some in high position. The ecclesiastical wars are likely to move forward into the next round, pitting progressive and fundamentalists parties against one another in new world wide Anglican groupings.

I want none of it.


There is a good bit of talk about the next twenty years. The Changing Attitude and Pluralist Speaks are both writing about this. I will write more on this, but right off, if there is to be a strong Anglican voice in the general Christian conversation in twenty years there will need to be churches  that fairly immediately do three things:


(ii) Commend the world of social, economic, artistic and sexual and other social intercourse as the environment in which vocation is lived out, and encourage and enliven people to find the holy in such enterprise. That is, to practice resurrection.


(iii) Live a conscious discipline of common prayer, in which we find with others joy in the praise, honor and adoration of God, and live that out with all the tradition brings and all the moment requires. That is to practice the presence of God.


Of course all sorts of people do these things. Anglicans are then really a sort of large untidy religious community of folk who learned to do these things by the peculiar people from those islands off the coast of Europe. I think we have learned well enough to ligthen a fire again.


But we will not if we bog down in the idiocy of attempting to be a world church. Better we Shut Down and Restart. The Word, the Vocation to Resurrection and the Presence are always local, and their meaning is always universal. So we will talk to one another, but we will work it out in fear and trembling where we are.


Little Gidding calls, and the local parish calls, and the tolling of bells calls, and we are called. Let's cut to the chase: We all need the Word, Resurrection and the Presence. All this other stuff is so much grass, which will dry and whither in the days to come.