The Philippine Episcopalian on Seminary Education 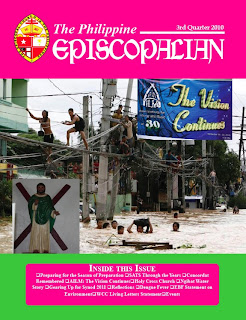 The history of mission is usually written from the prospective of the "sending" churches, and is a history of how and why missionaries were sent, and about success and failure. Very little has yet been written of missionary history from the "receiver's" perspective. I suggested in my book, "The Challenge of Change, the Anglican Communion in the Post Modern Era" that it would be helpful to have a greater sense of what missionary work looked like from the receiver's point of view.
In the context of Anglicanism this is being addressed more and more often. The Prime Bishop of the Episcopal Church in the Philippines, Edward Melacdan, has written a lengthy article on the history of St. Andrew's Seminary in the Philippine Episcopalian.  It is very much worth the read.
The Prime Bishop notes that for many years during and following Bishop Brent's work that opened the official presence of The Episcopal Church in the Philippines, it was thought that Filipinos were not suited as candidates for ordination. No effort was made to train Filipinos for ministry until during the depression it became impossible to send sufficient US or western clergy. Only then did the Missionary District in the Philippines begin to work at securing vocations from among the Episcopal communities IN the Philippines.  The story of the effort that finally led to the establishment of St. Andrew's Theological Seminary is one that points to some of the worse and some of the best in Anglican missionary efforts. The worse because it was strongly colonial and racially prejudiced. The best because as the Seminary grew in its vocation it took on greater and greater ecumenical and national importance.
Towards the end Bishop Melacdan raises a problem not unlike that felt in TEC seminaries: "The population of the seminary has dwindled ... Graduates are becoming less and less each year and St Andrews Theological Seminary could not even produce the needs for priests in the 6 dioceses (7 when the EDSP divides next year). This is partly because of the continuing onslaught of secularism in the world which has dramatically decreased the number of people with vocation. The ordained ministry is not the first choice of high school graduates. Given the opportunity to study, they would rather be professionals. The other reason is the fact that majority of our members are families who could hardly make both ends met financially. In many instances, people with vocation apply to seminary but when they are accepted they do not enroll because of the subsidized cost they have to pay and which their parents can ill afford. Some of those accepted do enroll but leave the seminary at some point of a given semester because of the same financial burden."
Read the article. It is a PDF File and can be downloaded HERE.  It begins on page 3 of the Philippine Episcopalian.  While you are at it, glance through the rest of the paper. The Episcopal Church in the Philippines is a small but vibrant member church of the Anglican Communion.
Posted by Mark Harris at 12/10/2010 11:38:00 PM